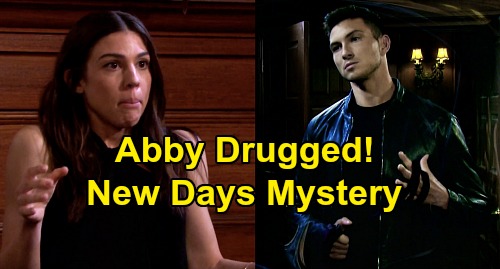 Days of Our Lives (DOOL) spoilers tease that Abigail DiMera (Kate Mansi) will face a horrifying ordeal. During the week of April 27-May 1, Abigail will deal with total terror thanks to her sudden hallucinations. DOOL fans watched as Abigail turned toward Chad DiMera (Billy Flynn) and saw a threatening Ben Weston (Robert Scott Wilson) vision in his place.

Ben was glaring and carefully wrapping that necktie around his hands – ready to go in for the kill! It was all in Abigail’s head, but this is still quite troubling. Abigail has a history of mental illness, so she’ll be filled with fear as she tries to explain all this to Chad. She’ll worry that she’s losing it again.

Abigail has battled wild hallucinations before, so she won’t want to go down another dark road. Fortunately, Abigail will do exactly what she should under the circumstances.

Days of Our Lives spoilers say Abigail will head to the hospital for a thorough examination. Kayla Brady (Mary Beth Evans) will likely take the lead on Abigail’s case, so Abby will be in good hands.

Days spoilers say Abigail will get some tests and anxiously await the lab results. Thankfully, part of the mystery will be solved soon after. DOOL viewers can expect Chad and Abby to learn the source of these strange delusions. It turns out there’ll be some sort of drug in Abigail’s system – one that leads her to see and hear things that aren’t there.

Chad will fume when he realizes Abigail was given something without her knowledge. Naturally, that’ll lead Chad and Abigail to wonder who was behind this drugging plot.

Days of Our Lives spoilers say Chad will corner Gabi DiMera (Camila Banus) and start hurling accusations. There’s plenty of bad blood here, so Chad will assume Gabi’s the one who targeted Abigail.

It’s easy to see why Chad – and even Days fans – might assume she’s to blame. After all, Gabi visited Stefan DiMera’s (Brandon Barash) grave and vowed to make sure “Chabby” got what they deserved.

However, it seems Gabi’s innocent just this once. Days spoilers say Gabi will be busy dealing with her own problems in the coming weeks. Gabi already has Stefan on her mind and in her heart. She’ll soon be preoccupied with Jake Lambert (Brandon Barash) the Stefan lookalike, so she doesn’t need another storyline.

Of course, that still leaves a mystery for Abigail and Chad to uncover: Who drugged Abby and why? It’s clear that this is a dangerous threat, so Chad and Abigail will want to get to the bottom of this ASAP. DOOL’s mysterious drugging culprit could strike again if they don’t figure it out fast!

As more Days news comes in, CDL will have other exciting updates. It’s nice to see Chad and Abigail are getting a new story to shake things up! Stick with us for hot Days of Our Lives spoilers, updates and news posts.