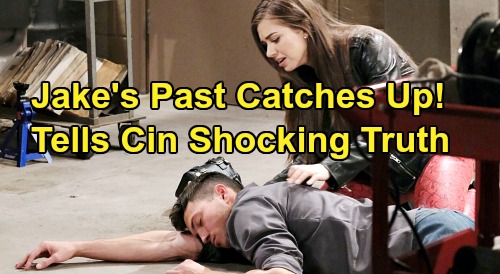 Days of Our Lives (DOOL) spoilers tease that Ben Weston (Robert Scott Wilson) will get a huge shock when some rough-looking characters show up at the garage. They’ll be looking for Jake Lambert (Brandon Barash), but Ben will let them know the boss is out – at least Ben’s boss.

DOOL fans can expect these brutes to get pretty pushy with Ben. They’ll act like Jake might be hiding in the back somewhere, but Ben will insist he’s not protecting him. Nevertheless, Days of Our Lives spoilers say Ben will still wind up a victim. These guys will attack Ben and leave him pretty banged up on the floor.

After Ciara Brady (Victoria Konefal) arrives to find Ben unconscious, she’ll coax him awake and tend to his injuries. Ciara will also call 911, so it won’t be long until Eli Grant (Lamon Archey) shows up to launch an investigation.

While Eli’s at the garage, Jake will appear along with Gabi DiMera (Camila Banus) – who’ll pretty much be following Jake all over town for a while.

Eli should be in for the same shock that Ben, Ciara and Gabi faced. Jake looks identical to Stefan DiMera (Brandon Barash), so Eli may do a bit of a double take. However, Eli will ultimately get down to business. Once Eli gets updates on Ben’s version of events, it’ll be Jake’s turn to get grilled.

Days of Our Lives spoilers say Jake will insist he doesn’t have a clue what happened. He’ll play dumb, but Ben won’t buy it. After Eli and Gabi take off, Ben will corner Stefan and push for the truth.

Since these guys clearly mean business, Ben will wonder what it is they’re after. He’ll note that they wanted something, so they had a very specific reason for tracking down Jake.

Of course, “Jake” may have left whatever town he was in due to these baddies. He might’ve gone on the run and headed back to Salem. Now that they’ve found Jake aka possibly Stefan, he’ll see that he can’t outrun his problems. Days spoilers allude to some poor choices Jake has made, which are now catching up with him.

Could picking this particular identity be one of those poor choices? Again, if this is Stefan, he would’ve needed to create a new life for himself after his “death.” If Stefan wanted to hide who he was, he needed a name change and the documents to back it up.

What if the real Jake is the one who messed up with these thugs? Stefan may have traded his own issues for a whole new set of them. If Jake died suddenly and Stefan took his place, these guys would naturally still want their money or whatever else they have in mind. This would still be Jake to them and everyone else.

Ben will definitely suspect there’s more to the story here, so he’ll push Jake to come clean. Jake may resist at first, but he might break down and confess at some point. Will Jake admit he’s really Stefan? Will he let Ben on the secret and explain his reasons for the deception?

It’d be good for Stefan to have a true confidant – and Ciara could be part of this, too. Ciara hates Gabi, so she’d have no problem keeping this secret from her. After all, Ben probably wouldn’t want to hide this Stefan bombshell from his girlfriend. He adores Ciara and would want to share everything.

Days writers could deliver a little secret Stefan circle. Maybe Ben and Ciara will be the only ones who know the truth for a while – if this is indeed Stefan! No one can confirm that yet, but an option that’s certainly still on the table.