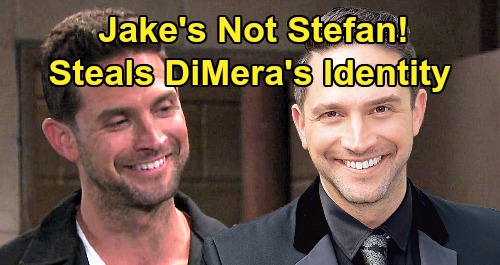 Days of Our Lives (DOOL) spoilers tease that Jake Lambert’s (Brandon Barash) arrival has brought some serious excitement to Salem. By introducing this character who looks exactly like Stefan DiMera (Brandon Barash), it opens up a world of possibilities. Jake is one big walking mystery right now, so many Days fans are loving the guessing game of who this guy is and what his motives are.

DOOL is playing it so nobody knows for sure if Jake’s telling the truth or not. Sometimes Jake seems to be genuinely in the dark on all this Stefan chaos. Other times Jake seems uneasy – like this is all a charade to keep everyone from finding out he’s actually Stefan. It’s smart for Days to keep this mystery going and take the audience along for the ride.

However, there could be an interesting twist depending on how DOOL wants to take this story. Let’s consider Jake’s life and some problems that’ll soon become more evident. For starters, Jake is a mechanic. That’s a respectable job, but it’s not one that’s going to make Jake a rich man.

During the week of May 4-8, some thugs will attack Ben Weston (Robert Scott Wilson) at the auto garage. They’ll come looking for Jake and will clearly want something from him. There’s a good chance that something is money – money that Jake doesn’t have and can’t get quickly though measly auto shop paychecks. Jake’s probably got some major debt that he needs to handle ASAP.

Jake’s also been reflecting on his ex – a fierce woman who kept him on his toes. She drove him crazy, but she also sparked real passion. Now it’s certainly possible this is Stefan and he was just telling Ben the “Stabi” love story. Nevertheless, it’s wise to consider another option.

Days of Our Lives spoilers say Jake will reject Gabi’s advances at first. Gabi will be convinced Jake is Stefan, so she’ll slap Jake and later plant a steamy kiss. Despite Jake’s efforts to push Gabi away, she’ll continue to harass him.

If this isn’t Stefan and is truly a new character, Jake is definitely going to be reminded of that ex he misses so much. Gabi is the kind of woman Jake’s attracted to, which could be important.

During the week of May 11-15, Kate Roberts (Lauren Koslow) will fill Jake in on all things Stefan. Days spoilers say Kate will give Jake the scoop on his DiMera lookalike.

Assuming Jake is Jake and not Stefan, let’s put this potential puzzle together. Jake is a guy who needs money and a chance to break free from his shady past. He seems lonely and likes a gal who drives him wild. If Jake just “confesses” that he’s Stefan, wouldn’t that solve all his problems?

Jake would instantly become a powerful, wealthy DiMera with a cushy mansion to live in. He’d have a hot wife who was madly in love with him. Jake’s money-seeking baddies would no longer be an issue. He could potentially steal the CEO spot away from Chad DiMera (Billy Flynn) or at least become co-CEOs with Gabi.

That way Gabi could bring the knowledge to the table, and Jake could just play along. There’d be fewer opportunities to get tripped up. Kate’s going to tell Jake pretty much everything he needs to know, but there’s always the Internet if Jake needs more info.

It would be incredibly easy for Jake to claim he’s Stefan – particularly in a town where nearly everyone rises from the dead.

Since everybody thinks Jake is this Stefan guy, he may decide to roll with it! Naturally, that’d bring the opportunity for Jake to fall for Gabi and truly come to enjoy this new life. That’s when Jake’s lies could ultimately be exposed – leaving Jake to fight for Gabi’s love as his authentic self.