BY hellodrdavis on May 1, 2020 | Comments: Leave Comments
Related : Days of Our Lives, Soap Opera, Spoiler, Television 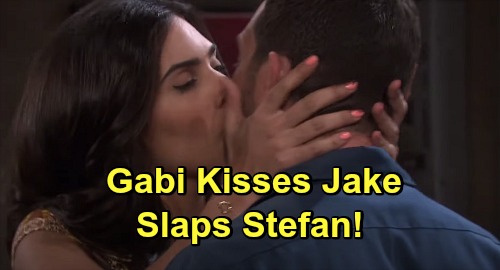 Days of Our Lives (DOOL) spoilers preview teases that one should never underestimate the women of DOOL. The new preview promo for the week of May 4th is all about three volatile situations that will arise, all of which are brought on by the unstoppable ladies of Days of Our Lives. There’s plenty of action brewing for next week, so let’s get right into it!

First off, there’s the situation with Sarah Horton (Linsey Godfrey) in Paris that’s about to explode. As DOOL viewers know, Sarah has just been confronted by Rex Brady (Kyle Lowder) in Paris.

Rex has just gotten off the phone with Kate Roberts (Lauren Koslow) and he knows all about the baby switch and that Sarah’s a fugitive who’s on the rum with Rachel Black. Now Sarah’s in a bind, because she’s about to go down.

Rex is currently in the process of calling the police, but Sarah can’t have that. It looks like Sarah’s going to somehow lure Rex back to the Paris apartment where she’s been staying, perhaps under the guise of wanting to turn herself in.

Or maybe Sarah will promise to take Rachel back to Salem herself. Whatever the case, the new DOOL promo shows Rex and Sarah back in the apartment.

And the apartment is where Sarah will go to extremes to protect herself and Rachel, whom she’s still calling Mackenzie “Micky” Horton. Sarah is shown in the promo bashing Rex over the head with some object, then the scene flashes to Rex all tied up and gagged in the apartment.

Sarah’s going to have to do some quick thinking from here, and it’s likely that she’ll leave Rex tied up and flee the scene with Rachel.

Next, the promo addresses the situation evolving between Steve Johnson (Stephen Nichols) and Hope Brady (Kristian Alfonso). As DOOL viewers know, the two friends are bonding over their shared experience as victims of Stefano DiMera (Stephen Nichols), and Hope has asked Steve to come stay with her for the time being.

But Kayla Brady (Mary Beth Evans) isn’t going to be happy about that development, and she’s shown in the promo telling Marlena Evans (Deidre Hall) that she’s upset that Steve has moved in with Hope.

Of course, where else Steve is supposed to go at this point? Kayla will be in the position of wanting Justin Kiriakis (Wally Kurth), but not wanting Steve to move on with his life, which should cause some friction.

As for Steve and Hope, they’re shown in the promo drinking beer together and having a good time as they laugh and hug each other. DOOL spoilers say that Steve and Hope will even end up destroying a portrait together, which will almost surely be the portrait that Hope painted of “Stevano” when she was Princess Gina Von Amberg (Kristian Alfonso). It looks like Hope and Steve will get closer, and Kayla’s not going to like it!

Finally, the new DOOL promo for the week of May 4th addresses the situation between Jake Lambert (Brandon Barash) and Gabi DiMera (Camila Banus). Jake is shown yelling at Gabi, “I’ve never seen you before!”

That causes Gabi to haul off and slap Jake, which he’s not going to appreciate. It looks like Jake and Gabi will have the same feisty chemistry that Stefan DiMera (Brandon Barash) and Gabi had!

The scene then flashes to a moment where Gabi grabs Jake and pulls him in for a kiss, probably to try to jog his memory for her. DOOL spoilers say that Gabi will be convinced that Jake is Stefan, and that she won’t take no for an answer. Jake will question Gabi’s sanity, even asking her if she’s taking any prescription medication.

It certainly looks like we’re in for some exciting scenes this week, especially between Jake and Gabi. We’ll see if Jake ends up feeling any sort of pull towards Gabi, or if he just finds her to be an annoyance.

Something tells us that Gabi is not going to give up on Jake! Stick with the NBC soap and don’t forget that CDL is your place for the latest Days of Our Lives spoilers and news.