Days of Our Lives Spoilers: Monday, May 4 – Gabi Insists Jake Is Stefan, Says Stop Lying – Rex Knocked Out Cold, Tied Up By Sarah 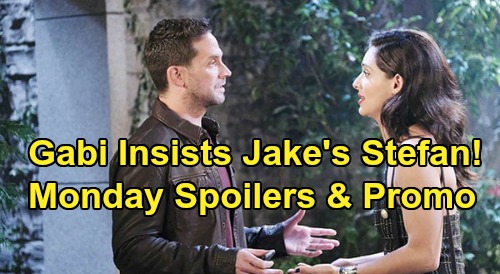 Days of Our Lives (DOOL) spoilers for Monday, May 4, tease that Gabi DiMera (Camila Banus) will confront Jake Lambert (Brandon Barash). DOOL fans know Gabi just ran into Jake again and was as shocked as ever. Since Jake looks identical to supposedly dead Stefan DiMera (Brandon Barash), meeting like this is disturbing to say the least.

However, Gabi won’t faint or try to shake things off this time. She’ll push Jake for some answers, but she won’t believe the ones she hears. Jake will probably tell Gabi that he’s been getting this a lot – people who think he looks EXACTLY like some guy named Stefan.

Gabi will think it’s more than that. She’ll feel like she’s looking at the face of her “dead” husband, so she’ll push “Jake” to stop lying.

Jake will be adamant that he’s never met Gabi and has no idea who she is. Of course, Gabi won’t be able to accept that. She’ll insist that if Stefan isn’t deceiving her, then he must’ve been turned into someone else by Dr. Wilhelm Rolf (William Utay) or something.

Gabi will be completely convinced that Stefan’s standing in front of her – somehow, some way.

Based on Jake’s behavior and dialogue, there’s a good chance Gabi got it right the first time. Jake opened up to Ben Weston (Robert Scott Wilson) about his feisty ex – the one he didn’t know whether to kiss or slap. Jake also kept the reason for their split vague with all that talk about how people change and move on. That certainly sounded like Stefan describing Gabi and his own grim situation.

Regardless, Gabi isn’t going to let this go. While Jake deals with Stefan drama, Kristen DiMera (Stacy Haiduk) will come clean to Lani Price (Sal Stowers). Days of Our Lives spoilers say Lani will resolve to help Kristen since the walls are closing in.

Lani will realize Kristen could go to prison for the rest of her life if she gets caught – and that would mean losing the chance to raise Rachel DiMera Black.

While Lani helps Kristen plot her escape, Sarah Horton (Linsey Godfrey) will stop Rex Brady (Kyle Lowder) from calling the cops. Since Sarah refuses to give up “Mickey,” Rex suggested she’d left him with no choice.

Sarah will change her tune on Monday, so Rex will believe she’s going to do what he’s asked and return Rachel.

Unfortunately, things will take a shocking turn after Rex mentions that Brady Black (Eric Martsolf) stabbed Victor Kiriakis (John Aniston). Rex doesn’t have any of the latest updates, so he still thinks Brady’s headed for the slammer.

It’ll seem that way to Sarah as well, which is why she’ll completely flip out. Sarah will reel over the thought of Kristen serving as Rachel’s sole parent.

Rex will manage to call Kristen briefly, which will be important later in the week. Although Rex won’t be able to reveal Sarah’s location, that call will eventually be traced by Lani. For now, Sarah will gain the upper hand by bashing Rex in the head to knock him out. She’ll hold Rex hostage back at the apartment, where he’ll be tied up.

Days of Our Lives spoilers say Rex will insist he’s going to be missed. He’s expected at work, so people will notice if Rex doesn’t show up. Nevertheless, Sarah will be too distraught to think straight. DOOL fans can expect Sarah to scramble as she tries to figure out what’s next.

Finally, Days spoilers state that Abigail DiMera (Kate Mans) will hallucinate again. It’ll be an even more terrifying experience this time since the drug’s out of Abby’s system.

This shouldn’t be happening, but it will thanks to the drug altering Abigail’s brain chemistry. Chad DiMera (Billy Flynn) will grow concerned, but he’ll try to be Abigail’s rock as this difficult ordeal continues.

We’ll keep you posted as other Days news emerges. It looks like another exciting episode’s in store! CDL’s the place to be for sizzling Days of Our Lives spoilers, updates and news posts, so stop by frequently.