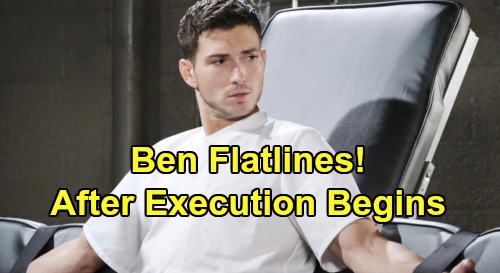 Days of Our Lives (DOOL) spoilers tease that Ben Weston (Robert Scott Wilson) will head back to prison and prepare for the bitter end. Ciara Brady (Victoria Konefal) will undoubtedly refuse to give up hope, but Ben just won’t see any way out of his current jam. This escape was supposed to give him time to clear his name, but that plan didn’t pan out.

Once Ben’s incarcerated once again, he’ll feel like his death is inevitable. Days of Our Lives spoilers say Ben will share one last bonding moment with Will Horton (Chandler Massey), who’ll ultimately be released. Ben will be glad to see Will get his happy ending, even if he can’t have his own.

Later, Ben will open up to Clyde Weston (James Read) about how he’s feeling. He’ll hate that it had to end this way, especially since his demise will take such a toll on Ciara. Ben will worry about how Ciara’s going to handle such a difficult blow.

Although Clyde’s been a pretty rotten father over the years, he still cares about Ben and will wish there was another way to help him. Sadly, Ben has exhausted all options. All that’ll be left to do is for this dad to say goodbye to his son. Days spoilers, updates and news say Ben will bid Clyde a heartfelt farewell and get ready to die.

Will’s about to score his freedom thanks to Maggie Kiriakis’ (Suzanne Rogers) confession, but he’ll still want to be there for Ben’s execution. This isn’t something Ben should have to go through without support.

Days of Our Lives spoilers say Marlena Evans (Deidre Hall) will show up to provide a comforting presence, too. Will and Marlena will dread Ben’s lethal injection, but their hands will be tied.

Of course, Ciara will be working all possible angles while Ben’s throwing in the towel. Just because Ben surrenders to his death doesn’t mean Ciara has to! DOOL spoilers say Ciara will uncover vital info about Jordan Ridgeway’s (Chrishell Stause) killer – and it’ll happen just before the execution begins.

It sounds like that’ll mean good news for Ben, but it’ll apparently play out a bit too late. Days of Our Lives spoilers say Ben will flatline, so Ciara will likely arrive on the scene and freak.

Since we know Ben’s going to survive, he’ll have to be resuscitated! Some shocking Days scenes are on the way, so stay tuned. As other DOOL updates emerge, CDL’s your hotspot for all the latest Days of Our Lives details.