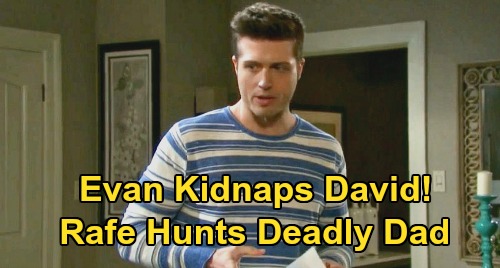 Days of Our Lives (DOOL) spoilers tease that Evan Frears’ (Brock Kelly) world is about to fall apart. He’s keeping some major secrets, but secrets never stay buried for long in Salem! Evan’s headed for quite a downfall, but let’s focus on some minor trouble first. It could actually be more important that it seems on the surface.

DOOL fans know Will Horton’s (Chandler Massey) stalling his little heart out behind bars. Sonny Kiriakis (Freddie Smith) couldn’t understand why Will pushed for the divorce and then decided to drag his feet.

Will scrambled to provide excuses and truly wants to keep hope alive. He can’t bear the thought of formally cutting ties with his husband – and thankfully, he won’t have to.

After Maggie Kiriakis (Suzanne Rogers) finally recalls the night of the crash, she’ll realize she’s to blame for Adrienne Kiriakis’ (Judi Evans) death. It won’t be long until Will’s freedom is set in motion.

Sonny cares about Evan and has appreciated his support through his crisis with Will. However, they’re not really in that deep yet. It’ll be an easy decision for Sonny to ditch Evan and reunite with Will.

Jordan Ridgeway (Chrishell Stause) was terrified of her “baby daddy,” who is almost certainly Evan. There must’ve been a reason Jordan was so scared. Evan clearly has a dark side when he’s pushed to his limit.

Since Ciara Brady’s (Victoria Konefal) first killer theory was wrong, it’s doubtful Days would make her second one wrong, too. With that in mind, Jordan’s father is most likely behind Jordan’s murder.

Once Sonny pulls away from Evan, it could trigger a bit of that darkness. Evan’s at least not going to feel like there’s much left for him in Salem – except for David of course.

Once Rafe Hernandez (Galen Gering) confronts lying Evan during the week of February 24-28, this storyline may really explode. If Evan can’t be in David’s life through this nanny ruse, he’ll surely want to find another solution.

Based on what happened with Jordan, Evan is someone who’s capable of spiraling out of control. Days of Our Lives is usually pretty good about taking advantage of their dramatic opportunities.

The obvious next step for Evan would be to kidnap David. It’s easy to imagine Evan holding Rafe at gunpoint or making some other shocking scene that shows he’s snapped.

Whatever the case, Days of Our Lives spoilers, updates and news say David will be at risk. Rafe may end up in a desperate fight to find David before he disappears with Evan for good! There’s also the matter of anyone who might dare to get in unhinged Evan’s way.

Some Days bombshells are coming up, so don’t miss what’s in store. We’ll pass along DOOL updates as other news comes in. Be sure to drop by CDL regularly and check out all our hot Days of Our Lives spoilers.