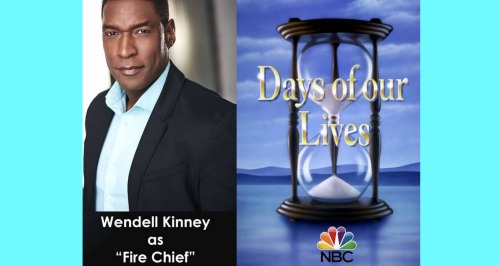 Days of Our Lives (DOOL) spoilers reveal that a new actor is joining the cast of the NBC soap – and his role could serve as a huge hint about what’s ahead. On Instagram, Wendell Kinney revealed that he’d be featured in an upcoming episode of Days and will be playing “Fire Chief.” Obviously, it stands to reason that if DOOL needs a fire chief, there’s going to be a fire!

Before we unpack what that might mean, let’s talk a little more about Kinney. He seems excited to have booked this gig, which seems to be a one-day thing for now. Of course, Kinney could be called back for more episodes in the future if the need arises.

“Excited to announce that I have been cast on an upcoming episode of NBC’s ‘Days of Our Lives’ as Fire Chief,” Kinney said in his Instagram post. “Forever grateful. Loving this journey and what God has continued to reveal and bless me with. #blessed #Godsfavor #actorslife #NBC #DaysofOurLives #daytimetv #soaps”

It turns out this isn’t Kinney’s first role in the world of daytime dramas. He also played a minister on The Young and the Restless back in 2018. Y&R fans will remember Hilary Curtis’ (Mishael Morgan) heartbreaking deathbed wedding to Devon Hamilton (Bryton James), which this minister was on hand for.

As for Kinney’s role on Days of Our Lives, not much is known just yet. There’ll undoubtedly be more details as Kinney’s airdate draws near, but we still have a clue since the role itself is pretty revealing. Days spoilers say there’ll obviously be a fire, which brings the potential for danger and even lost lives.

After all, several actors have already been dropped from their contracts and more departures will be announced soon. Days of Our Lives spoilers, updates and news. say the show will need ways to write out the people headed for the exit door. Will someone die in this upcoming fire? There’s at least a chance that someone might be severely burned and sent off canvas for treatment.

Whatever the case, it’s an interesting hint to ponder. Congrats to Wendell Kinney on his new role! Days of Our Lives fans will look forward to this fire chief’s involvement in the story to come. As other DOOL news and updates become available, we’ll pass them along. Stick with CDL for all your Days of Our Lives spoilers and casting info.

Excited to announce that I have been cast on an upcoming episode of NBC’s “Days of Our Lives” as Fire Chief. Forever grateful. Loving this journey and what God has continued to reveal and bless me with. #blessed #Godsfavor #actorslife #NBC #DaysofOurLives #daytimetv #soaps Thank you everyone for your encouragement and continued support. www.wendellkinney.com www.imdb.me/wendellkinney