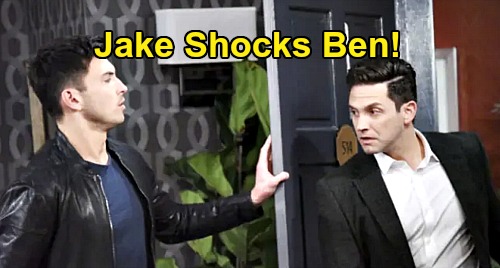 Days of Our Lives (DOOL) spoilers tease that Ben Weston (Robert Scott Wilson) will get to know someone new, but he’ll have a very familiar look. When Ben meets Jake Lambert (Brandon Barash), he’ll be rattled by how much Jake resembles Stefan. Ben will undoubtedly have tons of questions, but Jake’s answers should leave him satisfied – at least for now.

In other words, Ben won’t believe this is his former boss. However, Days spoilers say Jake could be Ben’s new one! It’s fitting for Stefan’s lookalike to hire Ben since Stefan gave him a job when nobody else would. There’s been some buzz about Jake possibly owning a motorcycle garage based on a leaked set pic. We do know a bike shop set will indeed pop up.

Of course, we should also note that Jake’s dressed a little nicer in a new Days pic. He’s got a suit on without a tie, so that’s not exactly what a mechanic would wear. Even so, mechanics often dress up from time to time – particularly if they own the place and have to conduct business meetings.

Jake could own the motorcycle garage and still be dressed this way. Then again, there could be some other career DOOL has in mind for Jake. Regardless, it looks like Jake will become Ben’s new employer.

That’ll lead to more interactions, including one at Ben’s hotel room. Will that bring an opportunity for Ciara to meet Jake, too? Ciara’s sure to be just as floored when she sees Stefan, so she’ll inevitably grill him just like Ben.

What’s Jake’s story and where did he come from? Days of Our Lives spoilers say answers will be revealed in time! DOOL wants to play up this mystery for a while and keep fans guessing about whether Jake is Stefan or not. It seems likely that Stefan and Jake are the same person, but it could be a while before anyone in Salem gets confirmation.

For now, Jake’s appearance will just leave people feeling unsettled. For those who knew Stefan, seeing Jake will be like seeing a ghost! Will Ben be able to bond with Jake like he did with Stefan? Their friendship may not be quite the same, but it should be a friendship nonetheless. Maybe Ben and Ciara can help crack this whole Stefan case!