Days of Our Lives Spoilers: Ben Shot During Prison Escape – Captured Clyde Pushes Wounded Son to Flee, Save Himself 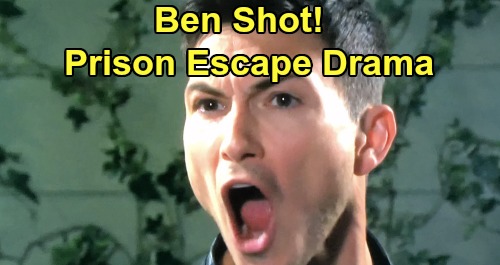 Days of Our Lives (DOOL) spoilers tease that Ben Weston (Robert Scott Wilson) will decide he’s got nothing left to lose. Sadly, Ben’s lethal injection is set to happen in less than three weeks. He can’t bear the thought of dying and leaving behind Ciara Brady (Victoria Konefal), the love of his life. That’s especially true since Ben knows how heartbroken Ciara would be over losing him.

With that in mind, Ben will decide it’s time to take drastic action. He’ll go along with Clyde Weston’s (James Read) escape plot, which Will Horton (Chandler Massey) will pitch in on. Of course, even a solid plan can go wrong – and most plans indeed go wrong on DOOL!

Days of Our Lives spoilers say this getaway scheme will come with a difficult obstacle for Ben. The trouble will start when Clyde and Ben get busted. A guard will rush after them as they’re trying to make a break for it, so Ben and Clyde will fear the worst.

After shots are fired, Ben will take a bullet and cry out in pain. That’ll leave Clyde with a split-second decision to make. Although Clyde is probably in the running for worst father of a lifetime, he still has his moments.

Clyde loves Ben, even if he’s never been able to show that love properly. He certainly doesn’t want his son to die, so he’ll urge Ben to save himself while he still can. Clyde will stick around and let himself get captured, which will likely provide a brief distraction.

The guard can’t round up two fugitives at once, so he may have to focus on Clyde. Days spoilers say Ben will make a run for it – or make a limp for it since he’ll have a bullet in his leg!

That’ll definitely make things tougher as Ben tries to evade the authorities. Nevertheless, Ben will know he’s got a lot riding on this. Ben has to stay on the lam or else Ciara won’t have enough time to crack the case. Luckily, Ciara will ride to Ben’s rescue in a surprising way soon enough.