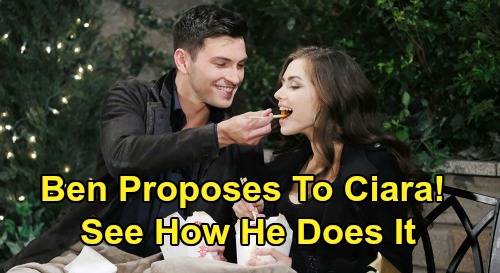 Days of Our Lives (DOOL) spoilers tease that Ben Weston (Robert Scott Wilson) and Ciara Brady (Victoria Konefal) finally have a bright future ahead of them. There were some scary moments during all the execution drama, but Ben’s heart ultimately started pumping again. Ben’s incredibly grateful to Ciara for never losing faith in him and for fighting so hard to make sure he lived.

Once Ben’s enjoying his freedom back in Salem, he can live life to the fullest again. There’s no word yet on when Ben will propose, but it should be coming up soon. Days of Our Lives spoilers say a big “Cin” wedding appears to be looming, so that’ll be something to look forward to down the road.

For now, let’s focus on the proposal itself. How will Ben pop the question? Days fans know how romantic Ben can be. He practically talks in marriage vows as it is! Ben feels like he’s found a once-in-a-lifetime kind of love with Ciara, so he may think she deserves the ultimate proposal.

There’s a popular theory among “Cin” fans that’s worth considering. Chinese food has always been a significant part of Ben and Ciara’s history. Ben even pointed out that Chinese food was a menu option for his last meal at Statesville. It might be fun if Ben proposed to Ciara in a fortune cookie as little throwback for “Cin” shippers.

Then again, Ben might find some other way to express how he feels and ask Ciara to be his wife. Even if Ben just does something traditional, it’ll still be special to Ciara. There’s even a possibility Ben will simply blurt out what’s in his heart one day. The initial wedding proposal may not even be planned since Ben’s just bursting with love for Ciara sometimes.

Regardless, Ciara won’t care as long as it’s coming from the man she adores. Days of Our Lives spoilers hint that Ben will offer up an engagement ring eventually. It’s safe to say Ciara will have no hesitation. She’s all in on her relationship with Ben and certainly proved that throughout the lengthy prison storyline.

It’s nice that DOOL’s gearing up for some “Cin” happiness. They deserve some bliss after everything they’ve been through to be together! Days spoilers say some exciting things are brewing in Salem, so stay tuned.

How do you think Ben will pop the question? Will he pull out all the stops to show Ciara the depth of his love? As other news comes in, we’ll pass along the latest DOOL updates. CDL’s a great place to visit for hot Days of Our Lives spoilers.