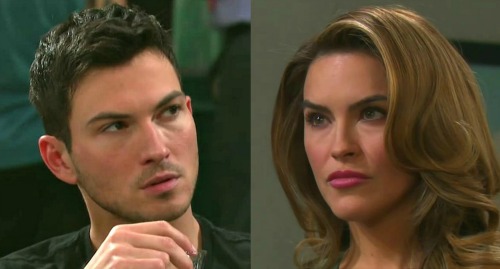 Days of Our Lives (DOOL) spoilers tease that Ben Weston (Robert Scott Wilson) will toss and turn the night before his wedding – and it won’t be because he has cold feet. It turns out Ben will have an eerie dream about Jordan Ridgeway (Chrishell Stause). Of course, it sounds more like a full-blown nightmare since Ben will be so disturbed upon awakening.

Why is Ben dreaming about Jordan before his big day? Some Days of Our Lives viewers might be hoping that Jordan’s somehow alive and perhaps behind the wedding sabotage. That’d be a great DOOL twist, but it doesn’t seem to be the case. On Twitter, Stause confirmed Jordan’s death and has even been trying to score new soap gigs.

“Welllll I am available now that Jordan met her demise,” Stause said in a response to a Days fan’s tweet about putting her on another soap. When someone else replied that the dead never stay dead in Salem, here’s what Stause had to say: “Right but until and if that phone rings, I like to keep my options open. Gotta hustle-lol!”

It seems like Stause would be staying hush-hush if you there were some alive Jordan shocker coming. From the sound of things, Ben may not even see Jordan on screen in his dream. It’s possible Stause filmed something that has yet to air, but there were no other signs of her being on set.

We’ll just have to see how it goes, but let’s get back to this dream and the meaning of it. When Belle Black (Martha Madison) was fretting about Claire Brady’s (Olivia Rose Keegan) release, she brought up Ben’s true recovery and Jordan’s disastrous pretend one.

Belle basically wanted to know which category Marlena Evans (Deidre Hall) thought Claire belonged in. She wondered if Claire was a Ben or a Jordan. Perhaps that’s the idea when it comes to Ben dreaming about his crazy sister.

The dream might even involve previously aired footage of Jordan – perhaps edited together with old Claire scenes to show that their behavior’s been similar.

That’s just a possibility to mull over, but the point is Ben may feel like this is a bad omen. This Jordan nightmare should leave Ben even more fearful about Claire and his big day. The good news is Claire will probably be innocent in what comes next. The bad news is what comes next will be catastrophic!

Welllll I am available now that Jordan met her demise 😳😆💀 I wouldn’t be able to pull off contract bc of other commitments, but if a show needs another guest performer-call me! 🙌🏽💗 https://t.co/S3k8NRATkr