Days of Our Lives Spoilers: Brady Shot and Left Bleeding from Gunshot Wound – Takes a Bullet in Marlena Rescue Mission 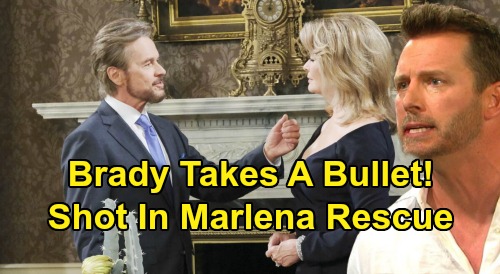 Days of Our Lives (DOOL) spoilers tease that John Black (Drake Hogestyn) will get a special delivery, which could offer a major clue about Marlena Evans’ (Deidre Hall) location. Stefano DiMera aka Steve Johnson (Stephen Nichols) will be busy prepping for his wedding to Marlena. Since Stefano will be making progress, he’ll hope to build life he wants with his “Queen of the Night.”

Of course, Marlena is already married to John, but Stefano won’t care about that. In fact, Stefano will send John a divorce decree as a message – a way to stick it to John and let him know Marlena’s moving on. This document won’t be something legal that would hold up in court, but it will be notarized. That’s where John’s big clue comes in.

John will show this clue to Brady Black (Eric Martsolf) and get some help with his goal. They’ll think they can trace Stefano’s steps through this hint and hopefully save Marlena ASAP. DOOL fans can expect a dangerous mission to get underway, which will have an especially shocking outcome for Brady.

Hope Brady (Kristian Alfonso) will pitch in after John and Brady ask her to. Naturally, Hope will be glad to do it. Days of Our Lives spoilers say Hope will be battling tremendous guilt over the things she did as Princess Gina Von Amberg.

None of those things were Hope’s fault, but it’ll be a while before she can move past her actions as Princess Gina. Hope will be looking for missions like this to help make amends.

Days spoilers state that a dramatic rescue is coming up. John, Brady and Hope will count on saving Marlena from her impending marriage to Stefano. They’ll want to free Marlena and get her back home where she belongs.

Unfortunately, things will take a terrible turn when Brady gets shot! It sounds like Stefano or someone on Stefano’s side will pump a bullet in Brady to stop him.

Whether Stefano fires the bullet himself or perhaps has Chad DiMera (Billy Flynn) do it, Days spoilers say Brady will be left bleeding from a gunshot wound. That’s sure to worry John – and Kristen DiMera (Stacy Haiduk) once she gets updates.

This news certainly won’t be what Kristen wants to hear, but she should find herself right by Brady’s side at the hospital later.