BY hellodrdavis on January 24, 2020 | Comments: one comment
Related : Days of Our Lives, Soap Opera, Spoiler, Television 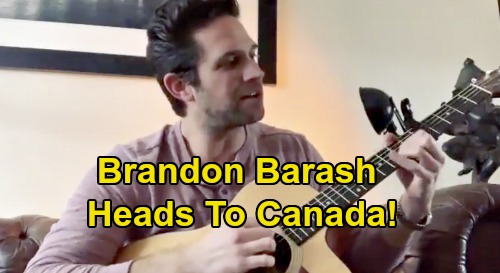 Days of Our Lives (DOOL) spoilers has some great news to pass on about an upcoming special appearance and charity event that will be co-hosted by DOOL star Brandon Barash, who previously portrayed Stefan DiMera on the NBC soap and who will be returning to the show this spring. He and Eric Martsolf, who portrays Brady Black, will be in Montreal raising money for a great cause.

Brandon and Eric will be hosting a Q&A, dinner, karaoke, and dancing event and the proceeds will go to an organization called Cedars CanSupport, which helps cancer patients and their families. It’s a great organization, and it’s wonderful that Brandon and Eric are offering their names and talents to the event.

Brandon’s announcement, and his awesome singing voice, prompted quite a few response tweets. Maurice Benard, who portrays Sonny Corinthos on GH, replied, “Great voice, Brandon” prompting Brandon to tweet back his thanks.

Many of Brandon’s fan also replied, with many of them praising the great work that he and Eric are going to help raise money for cancer patients. As one fan tweeted: “That’s amazing what you guys are doing. Unfortunately, cancer has been too much a part of my family and close friends.”

Other fans commented on Brandon’s lyrics to his song from the video, which included a line about how if attendees are lucky, then Eric Martsolf might take off his shirt during the event. One fan replied: “LOL – I hope someone gets a picture of Eric Martsolf shirtless and posts it on Twitter!”

Brandon also got quite a few replies concerning his pending return to DOOL this spring. As one fan noted: “Can’t wait to watch you again. #Stabi spring is almost here.” Of course, that fan is referring to the pairing of Stefan and Gabi DiMera (Camila Banus), which is known in the soap world as “Stabi.”

Ir will be interesting to see what happens when Brandon does return. So far, details of his return have been sparse, so will he come back as Stefan or perhaps another character? One never knows, but loads of fans are clearly hoping that he returns as Stefan and that he and Gabi have a grand reunion!

Are you looking forward to Brandon’s return? Stay tuned to DOOL on NBC and don’t forget to check CDL often for the latest Days of Our Lives spoilers, updates, and news.