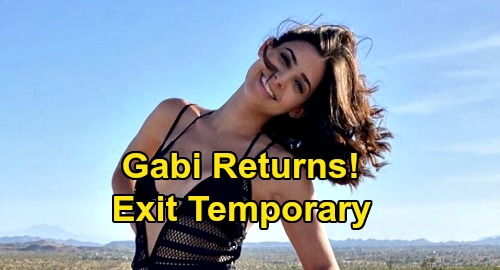 One of those includes Camila Banus, who plays Gabi Hernandez DiMera. While it is confirmed that Gabi leaves Salem with her brother, Rafe Hernanez (Galen Gering), she won’t be gone long.

Corday Productions has just confirmed (August 17) that Gabi’s exit is only temporary and Camila will be back on the set when production resumes September 1.

As you may recall, a few months ago Camila posted on Instagram that she was available for work. This led to many speculating that she might be leaving the NBC soap opera.

When the headlines started circulating on social media, Camila wrote on social media that Gabi wasn’t going anywhere. However, she didn’t explain and that just led to more speculation.

Just recently, as mass cast exits are being announced, Camila’s name was on the list of actors leaving the daytime TV show. Just last week, it was confirmed that Camila’s last episode would air on August 28, the same day as Galen’s. The spoilers state that Gabi and Rafe leave Salem together.

Corday Productions announced that Camila was exiting, but that it would be a brief absence. It is confirmed that Camila is going to be on set filming new episodes when Days of Our Lives production starts back up on September 1.

Days of Our Lives Spoilers: About Gabi Hernandez DiMera

Camila has played the role of Gabi since 2010. In the beginning, she was portrayed as a nice girl. She ended up pregnant with Ari Horton (now played by Sydney Brower).

The father of the child is Will Horton (Chandler Massey), who came out as gay and is now married to Sonny Kiriakis (Freddie Smith). Gabi, Will and Sonny have worked together to raise Ari.

It will be interesting what happens when Gabi returns. Will and Sonny are moving away when the Kiriakis heir gets an offer he can’t refuse. It is assumed that “Wilson” will be taking Ari with them.

Gabi promised never to be away from her daughter again after her time in prison. However, it seems that Will and Sonny are the constant parental figures in the child’s life.

Meanwhile, Gabi is doing everything she can to gain power, control and wealth. She is also a woman who goes to extreme measures to get revenge. Her love story with Stefan DiMera (Brandon Barash) seemed to soften her, but that all changed when Stefan died.

So, we will have to wait and see what happens with Gabi and what kind of storylines the writers have cooked up for her. Be sure to catch up on everything happening with DOOL right now. Come back to CDL often for Days of Our Lives spoilers, news, and updates.