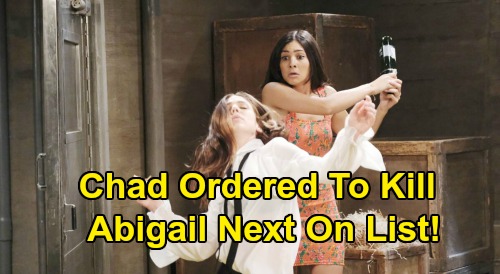 Days of Our Lives (DOOL) spoilers tease that Abigail DiMera (Kate Mansi) will fight for her husband. When Abigail returned home from Africa, she noticed a change in Chad DiMera (Billy Flynn) right off the bat. Chad did his best to hide truth, but he won’t be able to keep Abigail from uncovering the whole crazy story. Abby’s got a nose for news and always gets what she wants!

Once Abigail figures out exactly what’s going on, it’ll be time for the next step: breaking the hold Chad’s father has on him. Stefano DiMera aka Steve Johnson’s (Stephen Nichols) twisted plan must be thrwarted! DOOL fans know Chad’s been brainwashed, so he’s currently a loyal DiMera who’s willing to kill.

Gabi and Kate thankfully won’t die as a result of Chad’s mind manipulation, but Stefano’s spell still needs to be shattered ASAP.

Abigail will want her devoted hubby back – especially since this brainwashed Chad is such a threat to anyone Stefano disapproves of. This Chad certainly isn’t the kind of man who should be raising kids with Abigail, so she’ll take steps to restore their family. Abigail will do whatever she can to pull Chad out of this creepy, deadly trance.

On March 31, Days of Our Lives spoilers say Abigail will try to bring the real Chad to the surface. Of course, we can’t help but notice the word “try” in that sentence. When it comes to Days spoilers, “try” and “attempt” are often good indicators that a character will fail. The show may choose to drag this out a bit longer based on spring preview information.

Days of Our Lives spoilers suggest Abigail may land in grave danger thanks to Stefano. It won’t be long until Stefan realizes Abigail knows what went down. Stefano prefers this loyal version of Chad and has no interest in changing him back. Of course, we also know Stefano’s always had his fair share of issues with Abigail – and even threatened to shoot her not too long ago.

Will Stefano deliver more deadly orders to Chad? Will he demand that Chad kill his own wife? That’s certainly an option to consider since Stefano’s so ruthless. Stefano wouldn’t mind having Abigail out of the picture for good, so we’ll give you updates as Abigail fights for Chad and her life!

It sounds like some great Days drama’s on the way. CDL’s the place to be for hot DOOL details. Don’t forget to pop in regularly for other Days of Our Lives spoilers, updates and news.