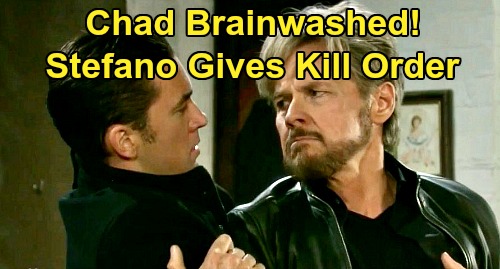 Days of Our Lives (DOOL) spoilers tease that Chad DiMera (Billy Flynn) will turn to the dark side, but there’ll be a good reason why. DOOL fans know Chad has a little sneakiness in him – as all DiMeras do. Nevertheless, Chad is far from ruthless. He just doesn’t have that same cruel streak that Stefano DiMera aka Steve Johnson (Stephen Nichols) or even Kristen DiMera (Stacy Haiduk) has.

That’s part of why Stefano told Kristen the truth about his identity before he told Chad. He couldn’t trust his son, who has a stronger moral code than most of the family.

During the week of March 2-6, Days of Our Lives spoilers say Chad will get ready to fulfill Stefano’s deadly wishes. He’ll want to do this for his father, so what’s going on here?

Obviously, Chad wouldn’t set out to murder some innocent Salemite. Many of Stefano’s enemies are people that Chad would consider friends or at least acquaintances. There aren’t many Days characters that Chad would even think about harming.

Even when it comes to DOOL villains, Chad would much rather let the authorities bring them to justice. He can get a bit cutthroat in business, but he’s a softie at heart. Chad’s all about his family, so it wouldn’t make sense for him to jeopardize his future with Abigail DiMera (Kate Mansi) and the kids.

With that in mind, there has to be another explanation for Chad’s dark turn. Just before Chad tries to carry out these lethal wishes, Days of Our Lives spoilers, updates and news say he’ll find himself under Stefano’s dark spell. Does that mean Chad will literally be hypnotized? It’s possible, especially since he’s wound up in a predicament like this before.

Chad was brainwashed by Andre DiMera (Thaao Penghlis) once upon a time, so DOOL may take a similar route here. Whatever the case, Chad could be a crucial part of Stefano’s strategy. Days spoilers say John Black (Drake Hogestyn) and Justin Kiriakis’ (Wally Kurth) new plan will end in disaster, so Chad might tie in with that.

Although Chad may not succeed in committing murder, he’s bound to cause a whole of trouble through this deadly plot! Days of Our Lives spoilers, news and updates point to some great drama, so stay tuned.