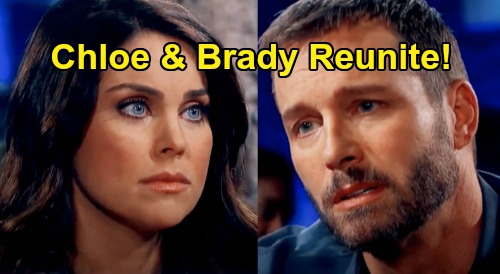 Days of Our Lives (DOOL) spoilers reveal that Brady Black (Eric Martsolf) will lose another love and another child when Kristen DiMera (Stacy Haiduk) flees with Rachel Black. Brady’s never been very lucky in love despite many, many attempts to build a romantic future. This time Kristen’s murder attempt on Victor Kiriakis (John Aniston) is blowing things up.

Of course, Theresa Donovan (Jen Lilley) already scored custody of Tate Black (Colin and Kyle Schroeder) and moved across the country with him. Brady barely gets to see his son and now he won’t be able to see his daughter.

When is Brady going to have a real family in Salem?! Brady loves hard, so he deserves to settle down with a woman he adores and at least one child.

Days of Our Lives spoilers say Kristen will be back again this summer based on leaked set photos. However, that doesn’t necessarily mean Kristen will come home. It’s possible Brady will secretly meet up with Kristen and Rachel for a visit somewhere.

Then again, Kristen might get apprehended and thrown in the slammer – leaving Brady to raise Rachel on his own.

Regardless of whether Brady eventually gets Rachel back or not, Days may be looking to pair him up with someone else. This forced “Bristen” split may stick. Many DOOL fans would love to see Brady and Chloe Lane (Nadia Bjorlin) become a couple again, so let’s consider that possibility.

Since Chloe’s returning to Salem down the road, reuniting with Brady is certainly an option. Why not let Chloe and Brady fall back in love? Brady could become a father figure to Chloe’s son, Parker Jonas (Christian Ganiere), so he’d still have a kid in a way.

Parker could use that kind of support in his life since Daniel Jonas (Shawn Christian) is dead. It’s easy to imagine Brady having a special bond with Parker due to Daniel’s heart, which was given to Brady through a life-saving transplant.

If Kristen keeps Rachel and Theresa keeps Tate, Parker could help fill the void for Brady. Even if Parker were SORAD’d to a troublemaker teenager, that’d just be another great reason for Brady to step up.

Since Brady always falls fast and hard, it wouldn’t take long for him to be head over heels for Chloe once she’s back in town. Days of Our Lives spoilers say some major romantic developments are brewing in Salem, so expect some breakups, makeups and shakeups.

As more Days news becomes available, there’ll be DOOL updates to pass along. “Broe” fans will cling to hope that Brady and Chloe will find love again sooner or later! CDL will have other fantastic Days of Our Lives spoilers, updates and news for you, so stop by frequently.