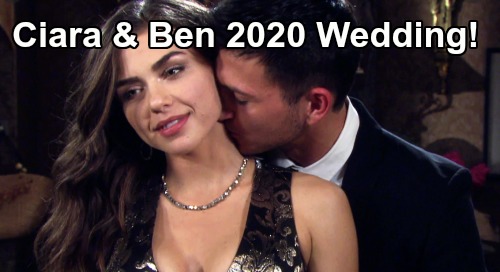 Days of Our Lives (DOOL) spoilers tease that Ben Weston (Robert Scott Wilson) will break out of prison along with his sneaky father Clyde Weston (James Read). They’ll get some help from Will Horton (Chandler Massey), but that won’t be enough to keep this getaway drama-free! Ben and Clyde will face some serious snags as they escape Statesville, but they’ll handle them as best as they can.

Clyde will undoubtedly be off doing his own thing, but what about Ben? He’ll need help, and Ciara Brady (Victoria Konefal) is just the person to provide it. DOOL spoilers say Ciara will appreciate the extra time to clear Ben’s name.

It’s been Ciara’s goal from the moment Ben landed behind bars, but it’s even more crucial now that Ben’s out of appeals and facing a lethal injection.

If Ben gets caught, he’ll be sent back to prison and will ultimately suffer a deadly fate. Since Ciara has no intention of letting that happen, she’ll step up as Ben’s hero!

Ciara will hide Ben at the DiMera gatehouse and try to get him off the hook. She’ll work on unraveling the mystery of Jordan Ridgeway’s (Chrishell Stause) true killer, which is sure to bring some shockers.

Days of Our Lives spoilers say this couple’s moving out of their “heartache” period like many other couples on canvas. They’re building to a new chapter – one with some happiness finally! Based on some leaked behind-the-scenes clues, there’s a good chance Ben and Ciara will get married in 2020.

Once Ben’s truly free and cleared of Jordan’s murder, he can focus on living his life again. Ben may not want to waste any more time since he loves Ciara with all his heart. A proposal is likely coming in the near future, which may set up a beautiful “Cin” wedding later in the year.

Ben and Ciara deserve it after everything they’ve been through just to be together. This Days duo’s love is the real deal. Are you looking forward to a blissful chapter for Ciara and Ben? Are you eager to see these two tie the knot?