Days of Our Lives Spoilers: Ciara Needs Her Father Back – Would Bo Brady Approve of Marrying Ben Weston?

BY hellodrdavis on May 16, 2020 | Comments: Leave Comments
Related : Days of Our Lives, Soap Opera, Spoiler, Television 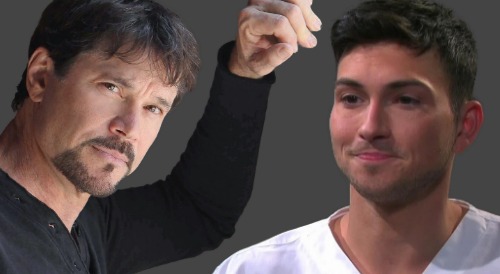 Days of Our Lives (DOOL) spoilers tease that Ciara Brady (Victoria Konefal) is excited as can be about her engagement to Ben Weston (Robert Scott Wilson). As DOOL viewers know, Ben proposed to Ciara with a washer from Bo Brady’s (Peter Reckell) bike, and Ciara later told Hope Brady (Kristian Alfonso) that she felt like it was her dad’s way of giving his blessing to her. It was a touching moment for Hope and Ciara.

Speaking of Hope, we couldn’t help but notice that Hope didn’t seem very thrilled about Ciara’s big news at first. Hope said that she needed a few minutes to “process” the news and that it really took her by surprise.

Of course, this makes some degree of sense, given that Hope missed out on a year of Ben and Ciara’s time together when she was Princess Gina Von Amberg (Kristian Alfonso).

But still, Hope’s first reaction to hearing about her daughter’s engagement wasn’t a positive one. And we can only imagine what Bo would say about the whole thing if he were still alive.

As DOOL viewers will remember, Bo was fiercely protective of both Hope and his daughters Ciara and Chelsea Brady (Rachel Melvin). Something tells us that Bo wouldn’t have been supportive of Ciara’s relationship with Ben from the get-go.

In fact, we can imagine that Bo would have fought tooth and nail to keep Ben away from his daughter, much like Hope did in the beginning.

As Days fans recall, Hope did everything in her power to persuade Ciara that Ben was no good and to constantly remind Ciara that Ben was a cold-blooded killer in the past. But eventually Hope softened toward Ben once Ben saved Ciara’s life.

But would Bo ever have softened toward Ben? We doubt it, and we doubt that Bo would have appreciated that his daughter was drawn to someone who was in some ways like himself when he was younger.

Long-time viewers will remember that Bo was a bit of a hothead in his younger days, and he was known to raise trouble. But we doubt that Bo would ever have accepted that he and Ben are anything alike.

Bo might have even argued that Ben could choose to stop taking his meds one day and become that cold serial killer again.

It seems that Peter Reckell doesn’t have any plans to return to DOOL, so we may never know how Bo would react to Ben, but we think it would be tough enough for Bo to see his little girl get married, let alone married to a former serial killer!

Stay tuned to DOOL and we’ll keep you up to date on the latest Days of Our Lives news and spoilers. Stick with CDL and you won’t miss any of the hot DOOL updates!