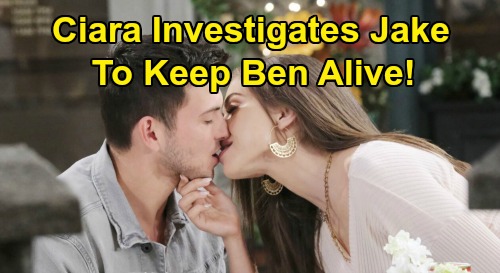 Days of Our Lives (DOOL) spoilers tease that Ciara Brady (Victoria Konefal) may soon have another case to crack. DOOL fans know Ciara worked hard to uncover the mystery of who killed Jordan Ridgeway (Chrishell Stause), and she ultimately succeeded. Of course, the reason Ciara was able to work so tirelessly was because she never forgot what was at stake: Ben Weston’s (Robert Scott Wilson) life.

Ciara refused to stand by and watch Ben be executed for a crime he didn’t commit. Likewise, Ciara’s not going to like it if Ben remains caught in Jake Lambert’s (Brandon Barash) dangerous world.

It’s obvious that Jake’s keeping some major secrets – ones that have already put Ben’s safety in jeopardy. If there’s one thing Ciara won’t tolerate, it’s anything that hurts Ben.

That’s especially true if Ben’s life is on the line, and it certainly could be. Those thugs wanted to send a message the first time around, but what happens when Jake doesn’t hand “it” over fast enough?

The baddies could take things much further than knocking Ben unconscious and bruising a few ribs. They may realize Ben’s indeed just someone who works for Jake and plot to kill him.

That would definitely send a bigger message, which Jake would hear loud and clear! Ben isn’t going to die, but Ciara can’t be sure of that. There’ll indeed be an incredibly dangerous situation during the week of May 25-29, but Ciara will be in the right place at the right time. She’ll come to Ben’s rescue and perhaps prevent a deadly attack.

If the peril Ben lands in is Jake’s fault, you can bet Ciara will be furious. Days viewers know Ciara plans to marry Ben and build a life with him, but she can’t do that if her groom is dead! It’s easy to imagine this second thwarted attack pushing Ciara over the edge.

Days of Our Lives spoilers say Ciara should be unsettled and desperate for answers, so she may corner Jake and demand them. Whether Jake is actually Stefan DiMera (Brandon Barash) or not, Ciara will want the truth about this mess he’s stuck in – the mess that keeps putting Ben’s life at risk.