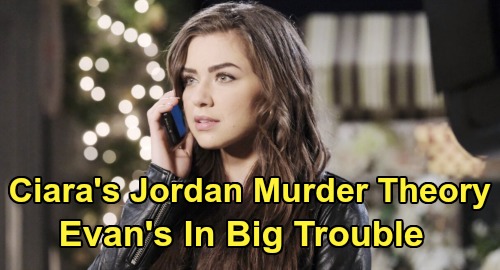 The good news is Ciara managed to get the truth about Will Horton (Chandler Massey). The bad news is that puts her back at square one. Ciara’s no closer to finding out who killed Jordan Ridgeway (Chrishell Stause) than she was before. Starting over is bound to be a daunting task, but Ciara will do whatever it takes to save her man! She’s determined to clear Ben’s name before it’s too late.

However, Ciara’s going to need some help with that. DOOL spoilers say Ben and Clyde Weston (James Read) will plot a prison break with Will’s assistance. That’ll hopefully buy Ciara a little more time to snoop around. She’ll be looking for any leads that could lead to Ben’s exoneration.

Days of Our Lives spoilers say Ciara will stumble across a clue. It may not be much to go on at first, but she’ll hope it could unlock a deeper mystery. This hint Ciara finds will spark a new theory – one regarding Jordan’s true killer. The wheels will start turning for Ciara as she pieces together what might’ve happened before Jordan’s demise.

Will Ciara’s theory involve Evan Frears (Brock Kelly)? Since Ciara got it wrong last time, Days might let her be spot-on with this big idea. Perhaps Ciara could have a hunch that Evan’s keeping some dark secrets. She might pick up on something from Kate Roberts (Lauren Koslow) or just get the feeling that Evan’s lying about his past.

If Ciara realizes Evan is David Ridgeway’s (Caleb and Kyler Ends) bio dad – and he almost certainly is – then it’d give Ciara something to work with. She’d have a trail to follow that might lead her to some murderous revelations. Days of Our Lives spoilers say Ciara won’t rest until the whole story’s exposed!

It sounds like the excitement’s revving up in Salem. We’ll give you updates as other Days details emerge. Stay tuned to DOOL and don’t forget to check CDL often for the latest Days of Our Lives spoilers, updates and news.