Days of Our Lives Spoilers: Ciara’s New Man, Opens Heart Again After Ben’s Death – Moves On from Love of Her Life? 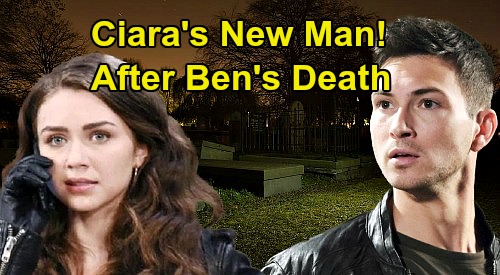 Days of Our Lives (DOOL) spoilers reveal that Ciara Brady (Victoria Konefal) will face some serious pain in the months ahead. Based on DOOL spoilers and hints the show’s offered up, there’s a good chance Ben Weston (Robert Scott Wilson) will be presumed dead at his own wedding! All signs point to the ‘Cin’ marriage event turning into a seemingly fatal disaster, but it doesn’t look like Ben will actually be killed off.

Nevertheless, it’ll certainly feel real and final to Ciara. That’s especially true if Ben’s body appears to have burned up in a fire, which could easily be the way Days of Our Lives writers take this. If that’s how it all plays out, what happens after Ben’s funeral?

Ciara will need support to get through such a difficult tragedy. She can get that from her friends and family, but could she find love again, too? Ciara’s bound to be broken and vulnerable if she believes Ben is gone forever.

It could open the door for a new man to win Ciara’s heart – one who helps Ciara push past the pain and see that she could still have a bright future.

Of course, Ciara would be reluctant to believe that at first. Ben is the love of Ciara’s life, so she probably wouldn’t see much hope for herself initially. She might feel like she’s lost her shot at true happiness, but her feelings could change over time.

Ciara may be drowning in grief for a while, but she might find a kind and handsome lifesaver.

Will Ciara eventually fall for someone else? That probably depends on how long Ben’s out of the picture, but we know people tend to grieve losses quickly on Days. After all, DOOL fans know Justin Kiriakis (Wally Kurth) fell fast and hard for Kayla Brady (Mary Beth Evans) after Adrienne Kiriakis’ (Judi Evans) death.

As other Days news becomes available, we’ll keep you posted on more updates. Days of Our Lives spoilers say Ciara will have to battle plenty of heartbreak, but could new love be waiting on the other side?

If so, that could definitely complicate things when Ben most likely shows up alive and well! Be sure to stop by CDL regularly for sizzling Days of Our Lives spoilers, updates and news posts.