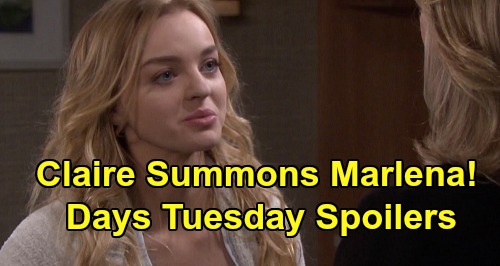 Days of Our Lives (DOOL) spoilers for Tuesday, June 2, tease that Sarah Horton (Linsey Godfrey) will stop by Victor Kiriakis’ (John Aniston) hospital room to let Vic know what she really thinks of him. Naturally, Sarah won’t have anything good to say! She’ll explode at Victor for teaming up with Xander Kiriakis (Paul Telfer) on the baby swap, which led Sarah to believe her dead daughter was still alive.

Sarah raised Rachel Black as Mackenzie “Mickey” Horton for a year, so she was understandably attached to her. It broke Sarah’s heart to give Rachel up, and now Brady Black (Eric Martsolf) is suffering without Rachel, too.

This baby switch snowballed into a disaster that only brought pain, so Days of Our Lives spoilers say Sarah will lash out at Victor for his despicable actions.

Once Marlena Evans (Deidre Hall) hears the commotion and interrupts, she’ll urge Sarah to leave. They’ll step out of Victor’s room to have a deeper conversation about what Sarah’s feeling.

Days spoilers say Marlena will be concerned about all the anger Sarah’s dealing with. Marlena will know it’s going to be difficult, but she’ll think Sarah needs to let go of that anger if she wants to move forward.

When Marlena suggests Sarah might still be in love with Xander, the idea alone will infuriate Sarah. Days of Our Lives spoilers say Sarah will argue that it’s ridiculous. She won’t get how Marlena thinks she could ever love a man who’d destroy her life, but Marlena will feel like love is complex.

Sometimes you just can’t help how you feel, so Sarah will at least reexamine her feelings a bit after this conversation.

Next, DOOL spoilers say Marlena will get a phone call that catches her off guard. It won’t be long until Marlena’s summoned to Bayview, where Claire Brady (Olivia Rose Keegan) will expect a visit from her grandma.

Marlena won’t know exactly what this phone call is about, but she’ll find out later this week! Claire believes she’s ready to be released, so she’ll have a pitch to make eventually.

In the meantime, John Brady (Drake Hogestyn) will be a little suspicious of Brady Black’s (Eric Martsolf) motives. John may think it’s strange that Brady was so adamant about taking back the CEO seat and running Victor’s company.

After all, Brady hates Victor for all the baby swap drama. John may not understand why Brady would want Titan to do well under the circumstances.

Brady actually wants to run Titan Industries into the ground, but he may not fill John in on that part. Instead, Brady could sell a story about how it’s the family legacy and that includes more than just Victor.

Even so, John knows Brady awfully well. He’s bound to suspect there’s more to the story when it comes to Brady’s Titan takeover.

Other Days spoilers say Jake Lambert (Brandon Barash) will make a major confession. Ben Weston (Robert Scott Wilson) will be on the receiving end in Tuesday’s DOOL episode, so let’s talk about what Jake will divulge.

Based on what Jake admits, Ben will realize that the trouble he’s in involves organized crime. He’ll also learn all about Jake’s ex-girlfriend, Gwen (Emily O’Brien).

After Ben gets updates on the truth behind Jake’s issues, he’ll find out Gwen is the key to fixing all this. Jake’s clearly mixed up with people who are bad news, but Gwen could somehow put a stop to the danger.

Unfortunately, Jake doesn’t have a clue where his former flame is. He’s lost track of Gwen, so Ben will ultimately offer to help Jake find her.

It sounds like some fantastic scenes are coming up, so stay tuned! Don’t forget to stop by CDL often for all the hottest Days of Our Lives spoilers, updates and news.