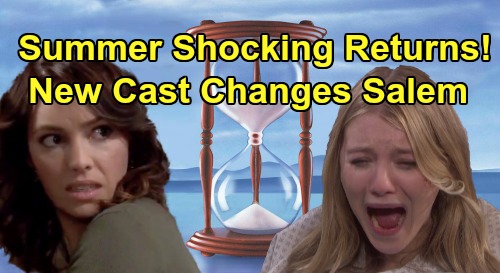 Days of Our Lives (DOOL) spoilers tease that we’ve got some major additions to the show’s cast this summer with some huge character returns and a couple new actors thrown into the mix as well. There are a whopping nine new characters coming onto the Salem scene this summer, and it’s sure to shake things up in a big way.

First off, there’s Claire Brady (Olivia Rose Keegan), who will be returning to canvas after being locked away in Bayview for treatment. DOOL viewers will remember that Claire was last seen on her way to Bayview after she tried to burn both Ciara Brady (Victoria Konefal) and herself alive.

Claire needed some serious help, and she’ll do her best to convince her grandmother Marlena Evans (Deidre Hall) that she’s all better and should be released. Ultimately, her pleas will work, and she’ll go to live with Marlena and John Black (Drake Hogestyn).

Also appearing for Claire’s release will be her mom and dad, Belle Black (Martha Madison) and Shawn Brady (Brandon Beemer). Belle and Shawn will at first think that Claire should come to Hong Kong with them after her release, but Claire will definitely have other ideas, having secured a place to live with Marlena and John.

It will be great to see Claire, Belle, and Shawn back in action on the show. We’ll see if Claire is still causing trouble, or if she’s really reformed!

Next up, DOOL fans will see the re-emergence of Allie Horton (Lindsay Arnold), who will be aged and is now a young adult. According to DOOL spoilers, Allie will show up on her uncle Eric Brady’s (Greg Vaughan) doorstep with a big secret that she wants to keep quiet…that she’s pregnant and nearly ready to give birth.

It seems that Allie will have decided that she wants to put the baby up for adoption, and it looks like she’ll want her big brother Will Horton (Chandler Massey) and Sonny Kiriakis (Freddie Smith) to adopt her baby.

Of course, there will be some issues here to consider – after all, Will is going to end up being the baby’s uncle and father if the adoption goes through. And Allie will have her life to get together after she gives birth, which will happen this summer.

It looks like she’ll have the help of Rafe Hernandez (Galen Gering), and her parents Sami Brady (Alison Sweeney) and Lucas Horton (Brian Dattilo), who we consider next.

Well, it won’t be long after Allie hits Salem that Sami and Lucas arrive. Sami and Lucas will need to absorb the fact that their daughter is pregnant, and that she’s about to give the baby up for adoption.

That should lead to some interesting parenting moments for the pair, and probably some blame to go around for Allie’s predicament. It wouldn’t be Days if Sami and Lucas weren’t bickering about their kids!

Sami will later have some major drama with Nicole Walker (Arianne Zucker). One of the Days of Our Lives summer promos shows a chaotic scene, with Sami and Nicole getting into a brawl and tumbling into a table with what looks to be Nicole and Eric’s wedding cake on it.

Sami might have some difficulties with the bond that Allie and Nicole form, especially since it looks like Nicole will know about Allie’s pregnancy before Sami will.

And Lucas will have some drama of his own. According to DOOL spoilers, Lucas will drop a big bombshell on his mom Kate DiMera (Lauren Koslow). This could be about Allie’s pregnancy, or there might be some additional drama that Lucas has gotten himself into. We’ll see what materializes here.

A very exciting development is the revelation from the DOOL summer previews that Phillip Kiriakis (Jay Kenneth Johnson) is returning to the show this summer. Phillip appeared in the DOOL Digital Series “Last Blast Reunion” a while back, but now he’ll be back on the show for another run. This should pose some interesting Kiriakis family moments.

Most notably, Brady Black (Eric Martsolf) might not be too happy to see Phillip right about now, especially since he’s planning on tanking Titan Industries as a means of getting revenge on Victor Kiriakis (John Aniston). Phillip could have aspirations of getting back in the mix at Titan, which could foil some of Brady’s plans.

Phillip will also mix with Xander Kiriakis (Paul Telfer). We should note that Xander looks pretty astonished in the DOOL summer previews to see Phillip. Xander had gotten used to being his Uncle Vic’s right-hand man, but that could all change now that Phillip is back to shake things up. Victor definitely has a soft spot for his son.

Another highly anticipated return for this summer is that of Vivian Alamain (Louise Sorel). Vivian was last seen on canvas (then played by Robin Strasser) back before the time jump when her son Stefan DiMera (Brandon Barash) was shot and killed by Lani Price (Sal Stowers). Vivian appears in one of the DOOL summer promos looking totally overcome by seeing Jake Lambert (Brandon Barash) and calling out to him, “My son.”

We’ll se exactly what brings Vivian back – it could be that she hears about her son’s doppelgänger and turns up to reclaim Jake as Stefan. If that’s the case, then she and Gabi DiMera (Camila Banus) could team up for the same end, although it’s also very possible that Vivian could have been the person who drugged Abigail DiMera (Kate Mansi) and set Gabi up, since Vivian never cared for Gabi. We’ll see what happens here, but it certainly looks like Vivian will latch onto Jake.

Finally, DOOL viewers will see a newcomer, Gwen (Emily O’Brien), appear on the Salem scene. We’ll first see Gwen at Bayview, as she’ll be Claire’s new BFF. It looks like Gwen will get released from Bayview pretty early on in the summer, and she’ll want to rekindle things with her ex, Jake.

Gwen and Jake are shown canoodling in one of the new Days summer previews, which absolutely horrifies Gabi who walks in and catches them.

It looks like Gwen could be something of a troublemaker, so her rivalry with Gabi could get interesting. And it will be interesting to see just how much of Jake’s organized crime connections involve Gwen. Is she involved with the mob as well? We’ll have to wait and see!

At any rate, it’s going to be a great summer with these awesome additions to the show. We’ve got some fan favorites returning, as well as some new characters and actors, and it’s all going to add up to some great drama!

Stay tuned to DOOL and don’t forget to check CDL frequently for the latest Days of Our Lives spoilers, daily recaps, and news. We’ve got you covered!