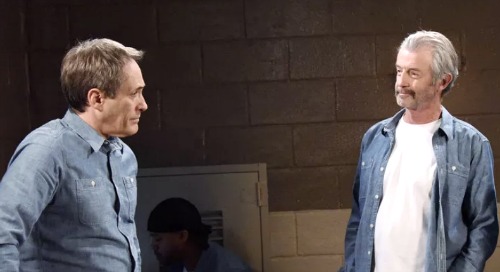 When Ben reveals that Evan’s real name is Christian Maddox, it’ll ring a bell for Clyde. He’ll undoubtedly ask Ben to repeat it before processing what it means. Days fans will recall that Clyde once plotted a prison break with Xander Kiriakis (Paul Telfer) as well as Orpheus (George DelHoyo). It’s the latter who should come into play here.

It sounds like Orpheus mentioned Christian to Clyde while they were locked up together. Is Christian the son of Orpheus? Days of Our Lives buzz suggests that’s true – and these new DOOL spoilers seem to back it up. Clyde and Orpheus had a lot of time to talk, so there were surely some discussions about their children.

Orpheus always had a soft spot for his kids, so he may have told Clyde all about Christian. Clyde must’ve had some things to say about his stepdaughter, Jordan, too. They might’ve even thought that they sounded like a perfect match.

Whatever the case, it sounds like Orpheus somehow put Christian aka Evan in Jordan’s path. In other words, Clyde inadvertently led to Jordan’s death! He should feel a bit bad about that since he’s already been feeling remorseful lately.

Clyde offered a sincere apology to Ben before his execution began. He admitted he hadn’t been a good father or stepfather, so he should feel even worse after this revelation.

However, we’ll defend Clyde on this one since he had no way of knowing Evan would murder Jordan. Ben will likely reassure Clyde about that. Still, Days of Our Lives spoilers, news and updates say this exciting twist should bring some flashbacks. There’s a good chance we’ll see some scenes of what Clyde and Orpheus discussed once upon a time.

As other Days news emerges, we’ll be sure to keep you posted on all the DOOL details. Don’t miss CDL’s hot Days of Our Lives spoilers and updates.