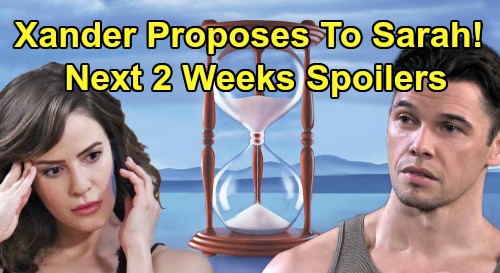 Days of Our Lives (DOOL) spoilers for the next two weeks tease that some startling moments are ahead in Salem. During the week of March 9-13, Chad DiMera’s (Billy Flynn) deadly plans will be interrupted. Of course, those plans actually came from Stefano DiMera aka Steve Johnson (Stephen Nichols). Chad’s been brainwashed into doing his father’s dirty work, so he’ll move forward with a couple murder plots.

Fortunately, Rafe Hernandez (Galen Gering) will arrive in the nick of time. He’ll appear in Gabi Hernandez’s (Galen Gering) hospital room before Chad has a chance to smother her. Later, Chad will be all set to kill Kate Roberts (Lauren Koslow).

Days of Our Lives spoilers say Chad will nearly stab Kate with a letter opener, but John Black (Drake Hogestyn) will barge in and derail that attempt.

John will have Dr. Wilhelm Rolf (William Utay) with him, so that’ll lead Chad to make a suggestion. The real Chad will be fighting through somewhat. Chad will urge Dr. Rolf to take out the chip that was implanted in Princess Gina Von Amberg aka Hope Brady (Kristian Alfonso).

As for Marlena Evans’ (Deidre Hall), her own procedure will be completed. Stefano will do his best to connect with Marlena afterward, but progress will take a while.

Next, Will Horton (Chandler Massey) and Sonny Kiriakis (Freddie Smith) will make a recommitment. They’ll reaffirm their love and enjoy this new chapter in their marriage.

Across town, Evan Frears aka Christian Maddox (Brock Kelly) will pull off a legal win. It sounds like Evan will get his confession thrown out and perhaps work around that DNA proof, too.

Regardless, Evan will meet up with a secret ally later – and it seems it’ll be Orpheus (George DelHoyo)! There’s a good chance Evan is Orpheus’ son, so Grandpa is probably the one watching David Ridgeway (Caleb and Kyler Ends).

Over with Kristen Brady (Stacy Haiduk), she’ll get some help remembering what her daughter looked like. Since Kristen will be struggling to recall, Brady Black (Eric Martsolf) will pipe up with a few details. One of those details will be Rachel Isabella DiMera Black’s birthmark, which was on her neck.

Nicole Walker (Arianne Zucker) will get updates on this birthmark and later notice one on Mickey’s neck as well. Days of Our Lives spoilers say Nicole will reel as she realizes what this means. She won’t want to believe a baby switch went down, but the evidence will start mounting.

During the week of March 16-20, Nicole will be a mess over the possibility that Mickey is really Rachel. She’ll decide she needs to do a little more digging and prove it, but she may hold out hope that she’s wrong. Nicole will certainly hate the idea of breaking Eric Brady’s (Greg Vaughan) heart like this.

Other Days of Our Lives spoilers say Princess Gina will get prepped for surgery. Kayla Johnson (Mary Beth Evans) will make sure Princess Gina’s all set, but it’s Dr. Rolf who’ll hear a desperate plea. DOOL fans can expect Princess Gina to beg for her life, but she’ll be transformed back into Hope anyway.

Once Hope’s herself again, she’ll be horrified by everything that happened while Princess Gina inhabited her mind and body. Hope will also get the news about Adrienne Kiriakis’ (Judi Evans) death, so that’ll be a difficult blow.

Back with Chad, mind control will convince him to get the family together for a little DiMera reunion. Chad will also launch more attacks on Gabi and Kate, so stay tuned.

Next, let’s talk about a shocking marriage proposal. Days spoilers as Xander Kiriakis (Paul Telfer) will ask Sarah Horton (Linsey Godfrey) to marry him! As for Clyde Weston (James Read), he’ll have a strong reaction to the name Christian Maddox. Clyde will realize he inadvertently led killer Evan to Jordan Ridgeway (Chrishell Stause) – and he probably did that through talking to Orpheus.

Days spoilers say Evan will be on a mission to keep kidnapped David, but that plan’s bound to crash and burn! As other DOOL news comes in, don’t forget to stop by for more updates. CDL will have all the latest Days of Our Lives spoilers and details.