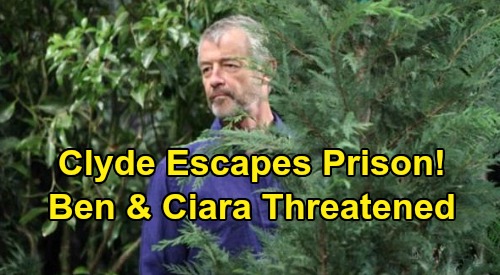 Days of Our Lives (DOOL) spoilers tease that Ben Weston (Robert Scott Wilson) is in for a huge shock. DOOL fans know Clyde Weston (James Read) attempted a prison break with Ben not too long ago. Although Clyde wasn’t able to get away, he encouraged a wounded Ben to keep going. Ben indeed made his escape and hid out with Ciara Brady (Victoria Konefal) before ultimately turning himself in.

Thankfully, Ben’s execution ordeal is over and that means he’s looking at a bright future with Ciara. Days of Our Lives spoilers say Ben will enjoy his freedom in the coming weeks, but it looks like he’ll get an unpleasant surprise on April 1. Clyde will make his getaway and most likely show up on Ben’s doorstep.

If Clyde arrives out of the blue and begs for help, that could certainly leave Ben in a bind. The last thing Ben would want to do is get sent back to prison. Helping a fugitive would be a quick way to score another stint at Statesville, so Ben should be wary.

At the same time, Clyde can be a pretty persuasive guy. In fact, Clyde doesn’t usually take no for an answer. Days of Our Lives spoilers say Clyde will manage to cause total chaos for Ben in these wild scenes. Ciara will inevitably be part of all the mayhem, which should leave Ben even more concerned.

Fortunately, there’ll be some good news at the end of all the panic. We mentioned that Clyde’s escape will likely play out on April 1 – and there’s an excellent reason for that. Days is doing a special April Fools’ Day special, which will feature several big returns and crazy story twists.

In other words, Ben’s world will fall apart, but not for long. It’ll all be revealed as fake by the time the episode wraps up. Perhaps Ben will get arrested again during this Clyde nightmare. It’s easy to imagine Ben winding up back behind bars or accused of more murders and preparing for another lethal injection.

Ben could awaken in a panic just as this nightmare spirals out of control. Regardless, Days of Our Lives spoilers say Clyde’s escape will bring some fun moments – at least while it lasts. You can bet Clyde will stir up a ton of trouble before this fantasy episode concludes.

As the latest Days details emerge, we’ll be sure to pass along more updates. DOOL viewers will be eager to see how Clyde’s escape plot derails Ben’s life. Stop by CDL regularly if you’re looking for the hottest Days of Our Lives spoilers, updates and news.