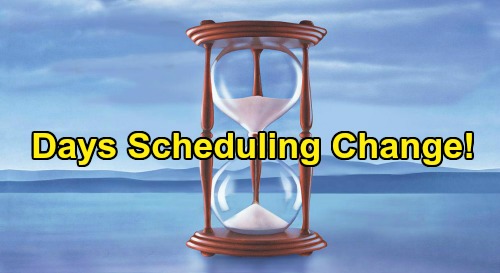 Days of Our Lives (DOOL) spoilers has a programming note to pass on about a change to NBC’s summer schedule that directly impacts Days of Our Lives. As you might know, the French Open and the Summer Olympics, which were scheduled to be broadcast on NBC, have been postponed due to the coronavirus pandemic.

Both of these events were previously scheduled to pre-empt DOOL for a collective total of 13 days over the summer, Well, according to Jason47’s Facebook Page, NBC has added DOOL back to the viewing schedule on those 13 days.

The dates in question here are May 25th, June 4th, June 5th, the week of July 30th, and the week of August 3rd. So, it seems that NBC will be airing episodes of Days of Our Lives on those dates that are now free.

For example, and as Jason47 has explained, this would cause the Halloween episode to air early – on Tuesday, October 13th. And the Christmas Day episode would end up airing on Tuesday, December 8th. Things would really be off.

Of course, since the French Open has been rescheduled to September/October, that would make up for the gap somewhat, but the French Open is a mere three days. That would still mean that the viewing schedule would be off.

But if NBC decides to fill those 13 days with classic/encore DOOL episodes, then it seems that the schedule and timing of the rest of the year’s holiday episodes would still be right on time.

We’ll have to wait to see what NBC decides to do about all of this, but at this point it seems possible that the decision could go either way. We’ll keep up with the matter and will let you know when we hear more about what’s going to happen here.

Would you prefer for NBC to air encore episodes of DOOL, or do you think they should fill those 13 dates with new episodes? Stay tuned to Days of Our Lives and remember to check CDL often for the latest DOOL updates and news.