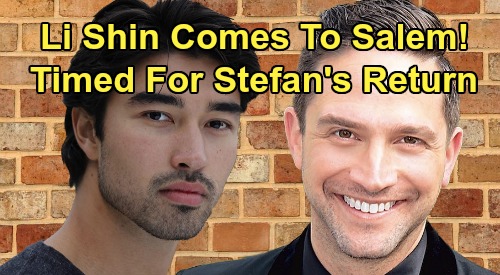 Days of Our Lives (DOOL) spoilers tease that a new face is coming to Salem this April. If you were fortunate enough to see the DOOL App series “Chad & Abby In Paris” that aired last year, then you might remember Li Shin (Remington Hoffman), who appeared briefly in a scene in which he fired Chad DiMera (Billy Flynn) from DiMera Enterprises.

That came after Chad had been falsely accused of assault by an employee, but soon everything got cleared up and Chad was reinstated. Of course, Li is the son of the much-mentioned Mr. Shin (Michael Hagiwara) who made a handful of appearances on DOOL last year. Viewers haven’t seen Mr. Shin for a while, but we’ll soon be seeing a lot of Li.

According to Days of Our Lives spoilers, Li Shin should make his first appearance on the Salem scene in mid- to late April. Details surrounding his return are sparse at this point, but he’ll certainly be appearing at an interesting time, since Stefano DiMera aka Steve Johnson (Stephen Nichols) is back.

In fact, we could see Li emerge in Salem with his eye on the DiMera CEO seat. He clearly has some sort of executive position in DiMera Enterprises already, and he could have his eye on the top seat. He’d certainly be a formidable opponent for Chad if TPTB decide to go that route, and he could be a new romantic interest possibility for someone.

In addition, the timing of Li’s arrival in April is interesting since it’s about that time when Stefan DiMera (Brandon Barash) is supposed to make his return. Of course, if Stefan returns as himself (and not a doppelgänger type of character), then it will mean that there was a coordinated effort to save him, and Dr. Wilhelm Rolf (William Utay) and Stefano were probably involved.

One wonders whether Li might have been involved in the plot to save and revive Stefan, too. After all, Li and Stefan are contemporaries, and although they were never shown on screen together before, they could have formed some sort of alliance while Stefan was rehabilitating. Who knows – they could even have some sort of plan going to reclaim DiMera Enterprises away from Chad!

We’ll see what happens here, but it seems that Li will be a good addition to the Salem scene. Do you expect that Li’s arrival in Salem will be connected with Stefan’s return? Stick with the NBC soap and be sure to keep CDL bookmarked and check back with us often for the latest Days of Our Lives spoilers and news.