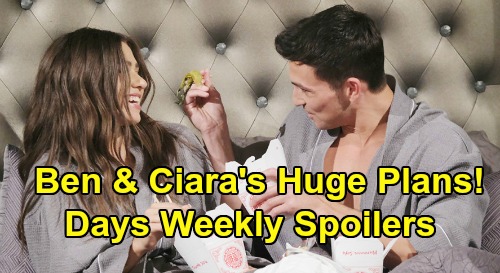 Days of Our Lives (DOOL) spoilers for the week of March 30-April 3 tease that some bombshells are brewing in Salem. For starters, Xander Kiriakis (Paul Telfer) and Sarah Horton (Linsey Godfrey) will pick a date for their upcoming wedding. The happier this sweet couple is, the worse it’s going to be after everything falls apart!

Over with Abe Carver (James Reynolds), he’ll have a pitch to make. Abe will push Lani Price (Sal Stowers) and Eli Grant (Lamon Archey) to make a joint Salem PD comeback. Their skills are still needed on the force, so it looks like Abe will talk them into it.

John Black (Drake Hogestyn) will save Marlena from Stefano’s clutches, but Chad DiMera (Billy Flynn) will still be under Stefano’s spell. Days spoilers say Chad will end up firing a bullet at Kristen DiMera (Stacy Haiduk), but it’ll graze Brady’s arm instead. It turns out that won’t be the only post-nuptials injury in the week ahead.

Anna DiMera (Leann Hunley) will also launch her stiletto into Stefano’s eye, but at least the move will be justified. Stefano will be planning to kill Tony DiMera (Thaao Penghlis), so Anna will simply do what she has to do! Days of Our Lives spoilers say Steve will lose his eye as a result, which means the pieces are coming together for Steve’s return.

Meanwhile, Abigail DiMera (Kate Mansi) will fight for the man she loves. This isn’t the first time Abigail’s worked to break Chad free from brainwashing – and it may not be the last since this is Salem! Nevertheless, Abigail will concentrate on her goal here. She’ll be desperate to bring the real Chad back, so we’ll see how long it takes to get the job done.

There’ll also be some fun returns in the week ahead as part of DOOL’s April Fools’ Day celebration. On April 1, Days spoilers say Leo Stark (Greg Rikaart) will pop up wearing a flashy suit. It won’t be long until Leo’s giving Sonny Kiriakis (Freddie Smith) and Will Horton (Chandler Massey) an interesting offer.

Daniel Jonas (Shawn Christian) will also return from the dead for one day only! Nicole Walker’s (Arianne Zucker) in for a shock when Daniel appears out of the blue. Daniel’s supposed to be dead, so Nicole should have questions in this fantasy episode.

Sheila Watkins (Tionne “T-Boz” Watkins) will also make an appearance, which will lead to a little drama for Eli and Lani. Clyde Weston’s (James Read) prison break will create some wild trouble, too.

Once the April Fools’ Day fun wraps up, Lani and Eli will have a very real encounter with Gabi Hernandez (Camila Banus). There’ll be some explosive tension, which is to be expected after everything Gabi’s done.

Days of Our Lives spoilers say Eric Brady (Greg Vaughan) will uncover a secret later. After Eric realizes Nicole deceived him, he’ll take his concerns to Abe. Eric will be convinced that Abe knows more than he’s letting on, so he’ll push for the truth.

Abe indeed knows about Nicole’s baby swap suspicions, which will leave him in a tight spot. As for Brady, he’ll spot Mackenzie “Mickey” Horton’s birthmark and let his mind wander. That birthmark is in the same heart shape as the one Rachel DiMera Black had. Brady will even remember it being in the same spot on Rachel’s neck.

This will certainly serve as a huge clue, even if Brady doesn’t want to believe it at first. The baby switch secret is about to heat up. Ben Weston (Robert Scott Wilson) and Ciara Brady (Victoria Konefal) will also talk about the bright future ahead. They’ll nail down some plans – both personal ones and professional ones.

As other news and updates emerge, we’ll definitely keep you posted. DOOL spoilers say some exciting episodes are in store for fans. CDL will have other terrific Days of Our Lives spoilers, updates and news, so check back frequently.