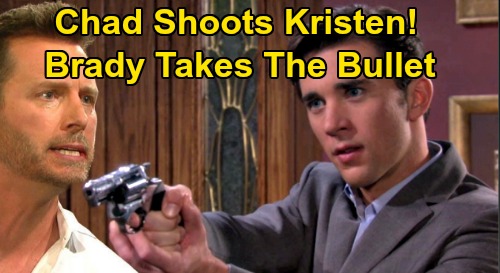 It turns out both Brady Black (Eric Martsolf) and Kristen DiMera (Stacy Haiduk) will land in peril next. During the week of March 30-April 3, Days of Our Lives spoilers say Stefano and Marlena Evans’ (Deidre Hall) wedding will spiral out of control. Brady will help John Black (Drake Hogestyn) track Stefano down with the intention of rescuing Marlena.

This marriage isn’t even legal, but that won’t stop Stefano from insisting Marlena should be his bride. Since Chad’s fully in Stefano’s corner, he’ll prepare to destroy anyone who stands in his father’s way. That includes Chad’s own sister! Days of Our Lives spoilers say Chad will find a reason to shoot Kristen, so he’ll take aim and fire.

If Chad’s bullet had hit Brady in the heart or head, this storyline could’ve taken a much darker turn. Thankfully, it’ll just be a small obstacle to overcome as Brady and Kristen’s love story continues.

The baby swap drama will take center stage eventually, so we’ll need Brady up and about for that. You can bet Xander Kiriakis (Paul Telfer) will get an earful once this switch secret’s unleashed!

For now, Chad will come unhinged and Brady will take a bullet shielding Kristen from harm. We’ll pass along more DOOL updates as they roll in. Are you looking forward to Chad and Kristen’s showdown?

Are you glad Brady will have a chance to play hero? Don’t forget to visit CDL regularly for more sizzling Days of Our Lives spoilers, updates and news.