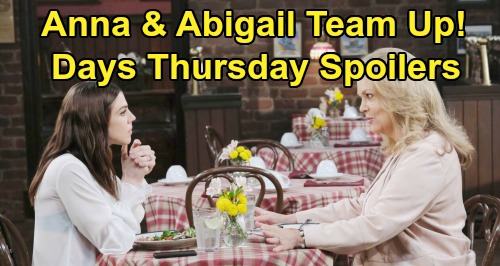 Days of Our Lives (DOOL) spoilers for Thursday, March 26, tease that Chad DiMera (Billy Flynn) will carry out his father’s wishes. Stefano DiMera aka Steve Johnson (Stephen Nichols) is putting a little family reunion together with Chad’s help. There’s a reason Stefano wants the DiMera gang in one place; it’s because he’s planning to make Marlena Evans (Deidre Hall) his wife.

DOOL fans can expect Stefano to turn on the charm and pop the question on Thursday. Stefano will ask Marlena to marry him, but she won’t be so sure about that. For starters, Marlena is still married to John Black (Drake Hogestyn)!

Days spoilers say Stefano will get irritated when Marlena brings up her current husband, but he’ll just try to push past it. Stefano will want Marlena to forget about John and focus on their bright future, so he’ll probably get Marlena to shut up for now.

Naturally, Tony will plan to bring Anna DiMera (Leann Hunley) as his plus one. Anna may put up a fight on that since she hates Stefano’s guts, but it looks like Tony will talk her into it eventually.

In the meantime, Days of Our Lives spoilers say Anna will catch up with Abigail DiMera (Kate Mansi). They’ll agree that Chad’s acting extremely weird, so their chat will give them a chance to compare notes and share their concerns. Abigail should get a step closer to figuring out Chad was brainwashed and poses a deadly threat.

Days of Our Lives spoilers say Abigail will make a stunning discovery on Friday, so Thursday’s cliffhanger might set that up. DOOL’s weekly preview video shows Abigail walking in the DiMera secret room as Gabi Hernandez (Camila Banus) waits with a Champagne bottle. Abigail gets knocked out with that bottle, so that may play out at the end of Thursday’s episode.

Across town, Hattie Adams (Deidre Hall) will stick to her latest choice. Once Hattie realized her dream of being with Roman Brady (Josh Taylor) wasn’t going to pan out, Hattie angrily quit her job and insisted she was done with him.

Roman followed Hattie and urged her to stay, but Hattie just won’t think that’s what’s best. Although Hattie will manage to calm down, she’ll still feel like she needs to say goodbye.

Days spoilers state that Hattie will indeed leave Salem behind, so stay tuned for her farewell scenes. As other DOOL news emerges, be sure to visit CDL often for more updates. It sounds like some exciting things are ahead, especially as Stefano and Marlena’s wedding plans move forward! Stick with us for the fantastic Days of Our Lives spoilers, news and updates.