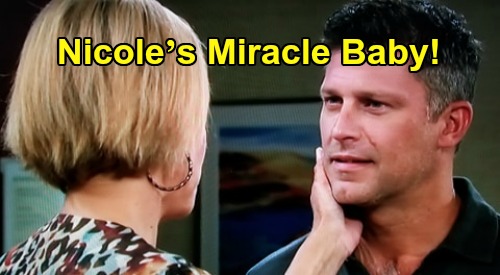 Days of Our Lives (DOOL) spoilers reveal that Eric Brady (Greg Vaughan) recently got the wrong idea about Nicole Walker’s (Arianne Zucker) hospital visit. Eric put a few clues together and reached an incorrect conclusion, but it might serve as hint about what’s to come. Let’s consider how those DOOL scenes played out.

Nicole fibbed about being there for a routine checkup and having bloodwork done, which gave Eric an idea. Since Nicole had previously mentioned being “late,” Eric grinned and wondered if Nicole might be pregnant. Of course, this was a pretty insensitive question to ask, which Eric ultimately admitted and apologized for.

Nicole’s been told it’s highly unlikely she’ll ever have another child – at least on her own. Days fans will recall Holly Jonas’ existence (Harlow and Scarlett Mallory) required the help of surrogate Chloe Lane (Nadia Bjorlin). Eric was sorry for even asking after Nicole shut the idea down, but Nicole was understanding about it. She didn’t blame Eric for being hopeful.

It’s interesting that Eric’s mind would jump to that conclusion so quickly. Why would Eric think Nicole’s pregnant when she spent years fighting desperately to become a mom? It was just a strange leap to make, even with the clues Eric gathered.

When things are strange on soaps, sometimes you should pay attention. If something’s a little odd, it’s often a sign about what’s ahead on Days of Our Lives. There are no guarantees that a miracle “Ericole” baby’s coming down the road, but shouldn’t we at least consider the possibility? If Eric’s hopeful about it, we might as well be!

Just because Nicole isn’t pregnant right now doesn’t mean it won’t happen later. If Days can bring tons of characters back from the dead, putting a bun in Nicole’s oven should be easy. It’s not all that farfetched when we’ve got this brainwashing and microchip stuff going on.

Many DOOL fans would like to see Nicole, Eric and Holly expand their sweet family. They deserve a happy new chapter, and a family addition would certainly achieve that. The timing couldn’t be better considering Days of Our Lives spoilers say Eric’s about to lose a “daughter.”

Mackenzie “Mickey” Horton isn’t really Eric’s child, but maybe Nicole could give him another baby girl or boy – another child they could keep and raise together with Holly. It’s a fun possibility to speculate on since Eric brought it up! As other news become available, don’t forget to check back in for updates.

Would you like to see Nicole have a miracle baby with Eric? Are you hoping for some “Ericole” family happiness? CDL’s your hotspot for Days of Our Lives spoilers, updates and news.