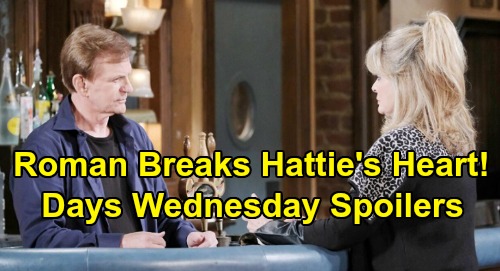 Days of Our Lives (DOOL) spoilers for Wednesday, March 25, tease that Ben Weston (Robert Scott Wilson) and Ciara Brady (Victoria Konefal) will enjoy some steamy fun. DOOL viewers know Ben’s loving every minute of having his freedom, but he’s about to love it even more. Ciara and Ben will hit the shower, so “Cin” fans should get ready to watch them scrub down and heat things up!

Meanwhile, Hattie Adams (Deidre Hall) will get a bit pushy with Roman Brady (Josh Taylor). Hattie’s been crushing on Roman for what feels like forever, but Roman clearly only cares about Hattie as a friend. Unfortunately, Hattie sees mixed signals where there aren’t any. As a result, Hattie will get agitated and pressure Roman to tell reveal whether he wants to be with her or not.

Of course, the answer is still no! Hattie’s lovable and hilarious, but Roman just won’t be interested – not in that way. Days of Our Lives spoilers say Wednesday’s episode will set up Hattie’s big decision on Thursday. It won’t be long until Hattie decides to pack up her stuff and seek a fresh start outside of Salem.

Although Nicole was taken aback over the outcome of the test, she won’t be able to shake her concerns. Nicole’s instincts will still tell her that Mickey is Rachel DiMera Black. Days spoilers say Nicole will open up to Abe about her baby swap suspicions – and the fact that Xander most likely messed with the DNA results.

Once Abe hears Nicole’s dilemma, he’ll back her up on seeking the whole truth and nothing but the truth. They have to get to the bottom of this, so they’ll join forces soon enough.

Over with Eric Brady (Greg Vaughan), he’ll express his fears to Sarah Horton (Linsey Godfrey). Eric’s doing his best to be OK with Sarah and Xander’s relationship, but he’ll remain worried about Xander’s role in Mickey’s life.

Since Xander and Sarah are engaged now, that may add to Eric’s apprehension. Xander could be locking in a permanent spot as Mickey’s stepdad – at least if this wedding was actually going to happen.

Sarah will undoubtedly reassure Eric, but they’ll both face an infuriating bombshell down the road. Days of Our Lives spoilers say this baby switch shocker will blow up a lot of worlds!

As other DOOL news emerges, don’t miss all our hot updates. This baby swap storyline is sure to bring some explosive moments. CDL will have more scorching Days of Our Lives spoilers, updates and news posts to pass along.