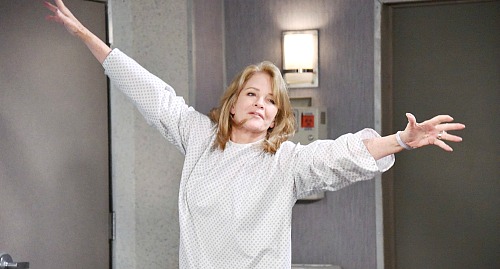 Days of Our Lives (DOOL) spoilers reveal that Hattie Adams (Deidre Hall) may realize she’s clinging to false hope. DOOL fans know Hattie was positively giddy after Roman Brady (Josh Taylor) kissed her on the cheek. Hattie noted that Roman had done it before, so she hoped it might mean something. She’s still got a thing for Roman, but he just isn’t interested in Hattie as more than a friend.

When Hattie posed as Marlena Evans (Deidre Hall) and tricked Stefano DiMera aka Steve Johnson (Stephen Nichols), she actually enjoyed the attention. Hattie nearly let herself surrender to Stefano, but she ultimately stopped since she’s only got eyes for Roman. Of course, the heart can’t always have what it wants, so Hattie may throw in the towel soon.

During the week of March 23-27, Hattie will corner Roman and seek some answers. She’ll confront Roman about something, so this could tie in with mixed signals. Naturally, they’ll probably just be mixed signals in Hattie’s mind! She may be seeing what she wants to see despite Roman’s lack of romantic interest.

Regardless, Days of Our Lives spoilers say Hattie will make a major decision about her future. It’s one that’ll surprise Roman and perhaps a few other Salemites, but Hattie will believe it’s the right choice. Since we know Hattie’s Days stint is winding down, it sounds like Hattie will decide to leave Salem.

Although Hattie’s a hilarious and fun character, she’s perhaps best in small doses. Hattie’s overstayed her welcome as far as some fans are concerned. Then again, other Days fans could never have enough Hattie! It’s probably just of a matter of whether you’re entertained or annoyed by Hattie’s antics.

Whatever the case, it never hurts to have a little time to miss Hattie. She’s mainly useful in situations where she has to pose as Marlena, and those opportunities have dried up. It’s easy to see why Hattie’s hitting the road, but don’t worry! Deidre Hall will continue to play Marlena as always – and Hattie will inevitably pop up again in the future. This is a so long for now, not a goodbye forever.

Days of Our Lives spoilers say Hattie will hopefully find something exciting to pursue elsewhere. She could use a good project to keep her busy. As other DOOL news emerges, don’t miss all CDL’s updates. Will you miss Hattie once she’s gone? How do you feel about her looming exit? Stick with us for great Days of Our Lives spoilers, updates and news.