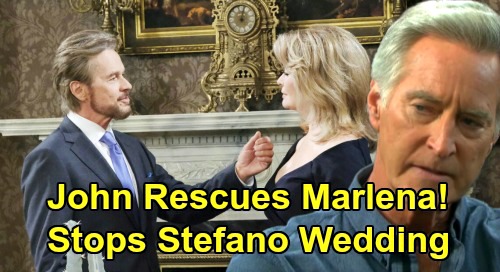 Days of Our Lives (DOOL) spoilers tease that John Black (Drake Hogestyn) will remain fiercely determined to get his wife back. However, Stefano DiMera aka Steve Johnson (Stephen Nichols) will plan to make Marlena Evans (Deidre Hall) HIS wife instead! Stefano apparently doesn’t care about Marlena already being married, so DOOL viewers can expect wedding plans during the week of March 23-27.

Marlena’s connection with Stefano will deepen just as Dr. Wilhelm Rolf (William Utay) predicted. She’ll find herself unable to put up much of a fight. There’s a certain level of trust as long as Marlena’s in this mind-modified state. She’s not afraid of Stefano, which isn’t a good thing since he’s clearly someone to be feared.

Stefano has proven that he’s capable of anything – and that’s exactly why John has to track Marlena down ASAP. He’ll grow increasingly concerned about what Stefano might do next.

After Stefano talks Marlena into marrying him, he’ll reveal his news to Tony DiMera (Thaao Penghlis) and Kristen DiMera (Stacy Haiduk). They’ll be shocked over the wedding updates, but the speedy timeline will bring an even bigger bombshell.

Days of Our Lives spoilers say Stefano will want to marry that very night! He won’t see any need to wait since Marlena’s fully under his spell – or so he’ll think. In reality, Marlena will struggle due to her lingering bond with John. Marlena will sense that John’s trying to reach her, which will keep her from devoting herself completely to Stefano.

Of course, things could change if John can’t get to Marlena in time. Days fans can assume Stefano will have a steamy post-wedding celebration in mind. It would be horrible for Marlena to be violated like that, so it’s crucial for John to find Marlena before it’s too late.

Luckily, Days of Our Lives spoilers say John will have some backup. Brady Black (Eric Martsolf) will help his dad out with the search, so it’s great that he’ll get more involved. Marlena has been Brady’s main mother figure throughout his lifetime. He also knows how much John loves Marlena and will want to do whatever he can.

Hope Brady (Kristian Alfonso) will be back to her old self and fully recovered by then, so she’ll pitch in, too. Days spoilers suggest the show’s offering the prime setup here. Will John burst in the wedding like a true hero?

It sounds like these DOOL nuptials could blow up a big way! An impressive rescue should be brewing, so don’t miss CDL’s hot Days of Our Lives spoilers, updates and news.