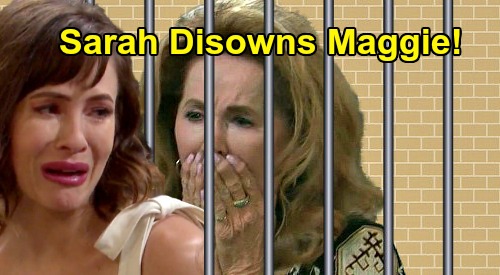 Days of Our Lives (DOOL) spoilers tease that Sarah Horton (Linsey Godfrey) is going to be in for a world of hurt. As DOOL viewers know, she’s finally facing some happy news about her daughter Mackenzie “Mickey” Horton. After months of dealing with Mickey’s tragic cancer diagnosis, Sarah and Eric Brady (Greg Vaughan) finally got word that the bone marrow transplant appeared to be a success. Happily, it looks like little Mickey is going to be just fine.

But there’s a big secret lurking under the surface, and that’s that Mickey is actually the biological daughter of Kristen DiMera (Stacy Haiduk) and Brady Black (Eric Martsolf).

Well, like most secrets on soaps, this one is going to explode sooner or later. Now that Nicole Walker (Arianne Zucker) suspects that the babies somehow got switched, she’s not going to let it go.

According to DOOL spoilers, she’ll do her best to get physical proof that the baby everyone’s calling Mickey is actually Kristen and Brady’s little girl. Exactly how it’s all going to go down remains to be seen, but after it’s all said and done, Eric and Sarah are going to be horrified.

It’s hard to imagine the level of grief they’ll feel when they realize that the baby they’ve bonded with all these months was never theirs, and that their actual daughter died.

According to Days of Our Lives spoilers, it’s going to be particularly hard on Sarah, and when you factor in the fact that her mother Maggie Kiriakis (Suzanne Rogers) caused the car crash that Sarah was involved in on the night of her daughter’s birth, it’s easy to see why.

It will probably take time for Sarah to process everything, but eventually she’s going to put it all together and realize that Xander and Victor Kiriakis (John Aniston) switched babies for a reason. When she finds out that they did it to protect Maggie and keep her from knowing that her actions led to the real Mickey’s death, Sarah will reel.

In fact, DOOL spoilers indicate that Sarah will wind up having an emotional breakdown over the whole situation. But that’s probably not all she’ll be feeling – she’ll likely be livid with Maggie for driving drunk and causing the accident that led not only to Adrienne Kiriakis’ (Judi Evans) death, but also to her baby’s death.

We imagine that it will be a pretty bad scene when Sarah confronts her mother about that fact. One wonders whether Sarah and Maggie’s relationship will be able to endure such a horrible truth.

It’s no wonder that Sarah will have a breakdown – she’ll be faced with not only the death of her child, but also Xander’s betrayal and the fact that her mother’s actions led to her child’s senseless death. It will be truly horrible for her.

Of course, time has a way of healing wounds, but this will be a pretty big setback for Sarah and Maggie’s mother/daughter bond. Do you think that Sarah will disown Maggie after the baby swap truth comes out? Stay tuned to Days of Our Lives and stick with CDL, where we’ll keep you up to date on all the latest DOOL spoilers and news.