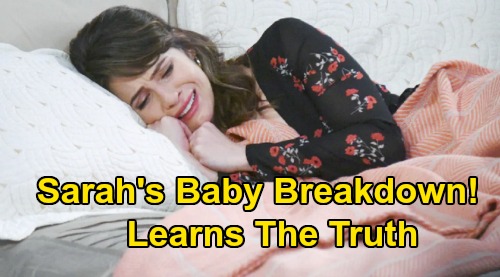 Days of Our Lives (DOOL) spoilers tease that Sarah Horton (Linsey Godfrey) could be in for a world of heartache soon. As DOOL viewers know, Sarah’s daughter Mackenzie “Mickey” Horton isn’t really her daughter. And right now, the only ones who are privy to that fact are Xander Kiriakis (Paul Telfer), Victor Kiriakis (John Aniston), and the doctor who helped them switch babies in the hospital.

It all started when the real Mackenzie died shortly after birth, while in the hospital nursery. Xander and Victor quickly switched out Mackenzie and the little girl who was born to Kristen DiMera (Stacy Haiduk) and Brady Black (Eric Martsolf).

Ever since, Kristen and Brady have believed that theirs was the baby that died, and Sarah believes that the baby that’s in her possession is her daughter.

Well, we all know that sooner or later the truth is going to come out about the baby switch. According to DOOL spoilers, Xander will run into the doctor who helped them switch the babies in the hospital.

Of course, that Dr. Raynor (Victoria Platt) is supposed to be long gone, so Xander should be pretty upset about that, and it will likely set some events in motion that lead to the truth coming out.

In fact, it looks like Nicole Walker (Arianne Zucker) could be key in revealing the truth, as she’ll spot Xander and the doctor together. It appears that she’ll overhear a conversation between the two, and of course Nicole will want to press until she uncovers the truth.

Whether this is how the baby swap secret comes out remains to be seen, but there’s probably a good chance that Nicole will be the one to find out the truth.

However it happens, the results will be explosive. Sarah and Eric Brady (Greg Vaughan) will be faced with the realization that their baby died, and that the little girl they’re in love with is actually Kristen and Brady’s daughter. That will be horrible news to take, but it will actually get worse from there, especially for Sarah.

As DOOL viewers know, Sarah has recently learned that her mother Maggie Horton (Suzanne Rogers) was driving the car that ran Adrienne Kiriakis’ (Judi Evans) car off the road while they were on the way to the hospital to deliver Mackenzie.

Sarah was under the belief that the car accident didn’t impact her ability to deliver a healthy baby, but once she learns the truth about how her baby died, she’ll likely blame her mother for it.

After all, if the accident wouldn’t have happened, the baby wouldn’t have suffered the trauma of the accident and very well may not have died. That will apparently be too much for Sarah to handle, as DOOL spoilers indicate that Sarah will end up having a major psychological breakdown.

It looks like the pain of her baby dying, plus having to hand over “Mickey” to Kristen and Brady, plus the knowledge that her own mother may have caused her baby’s death will be too much.

DOOL fans should look for Sarah to have some serious difficulties once she realizes everything that’s happened. And to top it all off, she’ll have to deal with the fact that her Xander was behind the whole baby switch.

Sarah will probably feel betrayed and like she has no one to turn to, hence her breakdown. It will be a terrible time for Sarah once she learns the truth and realizes that the child she believed to be her daughter isn’t her daughter at all.

Do you think that Sarah and Xander will ever be able to be a couple again, once she finds out that Xander switched the babies? Stay tuned to DOOL and be sure to check CDL often for the latest Days of Our Lives spoilers, updates, and news.