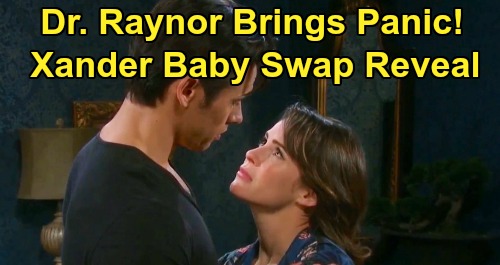 Days of Our Lives (DOOL) spoilers tease that Xander Kiriakis (Paul Telfer) will grow concerned after Maggie Kiriakis (Suzanne Rogers) remembers the truth about the crash. She’ll know she’s behind Adrienne Kiriakis’ (Judi Evans) death, but Xander will hope that’s the extent of what she learns. After all, there’s a far worse secret buried underneath this mess – one that would truly destroy Maggie.

Sarah Horton (Linsey Godfrey) was involved in that accident, which led to the death of her child and Maggie’s grandchild. The real Mackenzie “Mickey” Horton) died and was swapped for Rachel Isabella DiMera Black, Brady Black’s (Eric Martsolf) baby with Kristen DiMera (Stacy Haiduk).

DOOL fans know suspicions have already been raised thanks to all the bone marrow search drama. Xander was insistent that Tate Black (Colin and Kyle Schroeder) should be tested. Victor Kiriakis (John Aniston) ultimately went behind Brady’s back and got Theresa Donovan (Jen Lilley) to take Tate in for those tests. He also made the mistake of pushing Theresa to keep it a secret.

Since Tate blabbed, now Brady’s wondering what Victor and Xander have been hiding. He doesn’t know how Tate fits in exactly, but it’s given him a good clue. Once cover-up involving Maggie comes out, that could be another one.

Days of Our Lives spoilers say Xander will definitely worry that the swap will be exposed as spark chaos. He’ll worry Brady might start putting this puzzle together and see their motive.

It would break Sarah’s heart to learn Mickey isn’t her little girl after all. It would also crush Maggie to know she killed her granddaughter. Not to mention Xander would face their full fury and perhaps legal consequences! The stakes have never been higher for Xander, who’s finally happy and in love.

That’s why Days viewers can expect some trouble as a familiar face resurfaces. Dr. Raynor (Victoria Platt) will reenter the picture, so Xander will be stunned and furious.

This is the doctor who was in on the baby switch and paid to go away. The fact that she’s suddenly back won’t go over well with Xander, who could easily turn menacing.

What will Dr. Raynor want? Will she be looking for more money or will she have a crisis of conscience? Neither option is going to work for Xander! Days of Our Lives spoilers, updates and news say Xander will cross paths with Dr. Raynor and absolutely hit the roof. He’ll be in panic mode as the walls start closing in.

It looks like some great Days action’s looming. We’ll keep you in the loop on all the latest DOOL news and updates. Don’t miss all-out hot Days of Our Lives spoilers here at CDL.