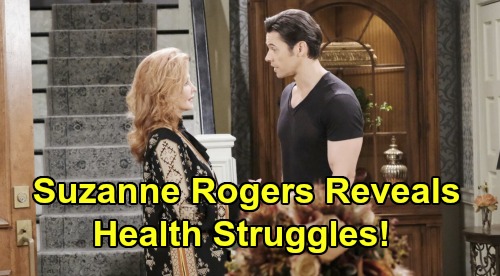 Days of Our Lives (DOOL) spoilers tease that Maggie Kiriakis (Suzanne Rogers) is on the verge of a horrifying realization and a heartbreaking confession. After Maggie realizes she was behind the crash that killed Adrienne Kiriakis (Judi Evans), she’ll come clean to Sonny Kiriakis (Freddie Smith) and face his fierce fury. Unfortunately, that’ll only be the start of Maggie’s terrible woes.

Maggie will realize she killed someone she cared a great deal about, so that’s bad enough. However, Maggie will also have to deal with the damage she did to Adrienne’s loved ones. She blew up Sonny and Will Horton’s (Chandler Massey) marriage – at least in a way.

Of course, Days of Our Lives will still have to reveal the baby swap at some point, which will bring another round of tragedy. Maggie caused the death of her own grandchild, so that’ll be perhaps the most devastating blow of all.

There’s also the fact that Maggie will soon be sitting behind bars. She’ll undoubtedly be locked up after her confession, so Maggie will really be at the low point of her life.

As you can imagine, Days of Our Lives spoilers say all of this will bring some powerful performances from Rogers. In an interview with Soap Opera Digest, Rogers talked about this daunting storyline and the difficulties it brought. It turns out Rogers put so much of herself into this story that it actually affected her health.

“It was so intense,” Rogers admitted. “It took its toll on me physically. I literally got ill when this was all over with because I went so deep into the character and played it for so much.”

Rogers went on to say she lost 23 pounds due to juggling this storyline and dealing with her elderly mom. She really wanted to do a good job for Days, but it was tough – especially when she had other family issues going on.

Rogers confessed that when she first heard Maggie would fall off the wagon, she wasn’t exactly on board with the idea. “I was like, ‘Oh, no. I really didn’t want to do this,’” Rogers said. She later found out she had diverticulitis, which was brought on by stress. Rogers felt like it all just piled up and made things hard for her.

On the bright side, Rogers enjoyed the breather that came with the recent Days hiatus. She’s also proud of the work she accomplished, so we’ll all look forward to seeing these upcoming scenes. Rogers clearly poured her heart and soul into them! We’ll give you DOOL updates and news as this storyline continues to play out.

What do you think of Maggie’s upcoming confession? Are you glad Sonny will finally learn the truth about Adrienne’s accident? DOOL fans won’t want to miss a minute of the action. Don’t forget to stop by CDL frequently for the latest Days of Our Lives spoilers, updates and news.