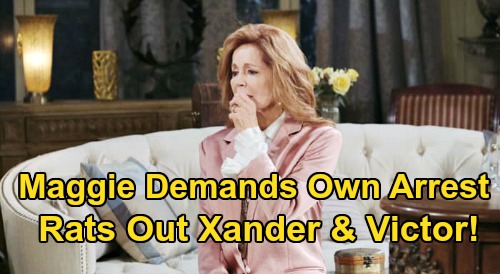 Days of Our Lives (DOOL) spoilers tease that Maggie Horton (Suzanne Rogers) will wrestle with difficult memories. Of course, she won’t be certain they’re memories at first. Maggie has no idea she was behind the crash that killed Adrienne Kiriakis (Judi Evans), but she’ll be forced to face that difficult truth soon enough.

DOOL fans can expect Maggie’s memory flashes to intensify until she can’t deny them. It looks like Maggie will even have a vivid dream about the accident, which will really push her over the edge.

Maggie just won’t see any reason why she’d be struggling with these images if they weren’t real. Her instincts will tell her there’s more to the story, so she’ll turn to the only two people who can help.

Days of Our Lives spoilers say Maggie will want answers from Victor Kiriakis (John Aniston) and Xander Kiriakis (Paul Telfer). They’ll be in panic mode as Maggie starts grilling them, but they won’t let Maggie see them sweat!

Xander and Victor will just try to keep the lies going. They’ll act like Maggie’s got it all wrong and will even seem a bit offended over her deception accusations.

Nevertheless, Days spoilers, updates and news say Maggie will continue to push the issue. It’ll finally dawn on her that she must’ve killed Adrienne. Maggie will accept that her memories are real and that a cover-up went down.

She’ll be horrified over her own actions as well as Xander and Victor’s. They’ve always just wanted to protect Maggie, but she’ll think their scheme was simply inexcusable.

It’ll be a lot for Sonny to process, so he’ll just let his rage take over. As Sonny blasts all of them, Maggie won’t blame him one bit. She’ll hate herself just as much in that moment.

Maggie will also be absolutely furious with Xander and Victor. She’ll let Sonny know she’s truly sorry for what she’s done, but she’ll know that’s not enough. It won’t bring Sonny’s mom back or rewind the clock in any way.

Days spoilers say Maggie will know there’s only one thing she can do to make this better. It won’t fix it, but at least it’ll be a step in the right direction.

DOOL viewers can expect Maggie to march herself down to the police station. She’ll waltz right in and turn herself in for killing Adrienne. Maggie will make a full confession, which should involve ratting out Victor and Xander, too. She’ll spill all and prepare to face her punishment, so Will’s going to walk free.

What about Xander and Victor? How are they going to wiggle out of this mess? Days of Our Lives spoilers say Maggie will undoubtedly be arrested after her startling admission, so we’ll see where things go from there. As other updates and news emerge, check back here at CDL for all the Days of Our Lives details.