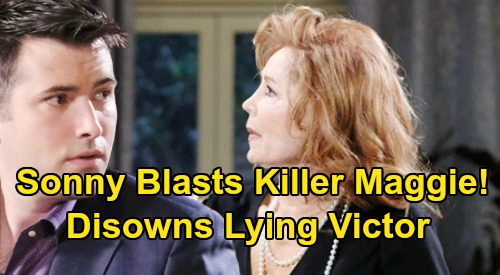 Days of Our Lives (DOOL) spoilers tease that Sonny Kiriakis (Freddie Smith) will overhear something shocking. He’ll be nearby when Maggie Kiriakis (Suzanne Rogers) is confronting Victor Kiriakis (John Aniston) and Xander Kiriakis (Paul Telfer) about their cover-up. Maggie will begin to remember the night of the crash, so she’ll demand some answers about what it is she believes she’s done.

The baby swap will remain under wraps for now, so let’s focus on Adrienne’s death. That’s certainly what Sonny will be focused on after he eavesdrops!

It appears Sonny will listen in and learn Victor hid Maggie’s actions along with Xander. After a brief confrontation with the cover-up duo, Sonny will turn his attention to the real culprit here.

Days of Our Lives viewers have watched Sonny grieve for Adrienne and lament his lost love with Will Horton (Chandler Massey). All of that was set in motion because of Maggie’s terrible decision that night.

When Sonny thought Will killed Adrienne, he was quick to rip into him for texting and driving. Once Sonny knows Maggie’s actually to blame, he’ll be even angrier. Sonny will let all his shock and rage explode as he realizes Will’s behind bars because of Maggie.

Furthermore, Sonny’s mom is in the grave because of Maggie. He’ll be appalled that Maggie would get out on the road after knocking back so much booze. Days of Our Lives spoilers say Maggie will admit it’s all true.

Maggie will think she deserves every bit of Sonny’s fury – and he’ll definitely unleash it! No one can blame Sonny after everything he’s been through since that fateful night.

Days spoilers say Justin Kiriakis (Wally Kurth) will eventually get updates, so it’ll be interesting to see if he’s just as outraged as Sonny. Justin may not be quite as riled up over the news, but he’ll definitely be upset and particularly hurt by Victor’s part in all this.

DOOL fans can probably expect Sonny and Justin to hold a grudge against Victor for quite some time. In fact, there’s a good chance Sonny will pretty much disown Victor – as well he should! Victor deserves to feel the heat for a while.

On the bright side, Will and Sonny’s reunion is just around the corner. Be sure to check back for more Days news and updates. CDL will have some great Days of Our Lives spoilers as this hot plot gets even hotter.