Days of Our Lives Spoilers: Why Did DOOL Fire Freddie Smith & Chandler Massey – Fans Outraged Over Sonny and Will’s Exit

BY hellodrdavis on February 18, 2020 | Comments: one comment
Related : Days of Our Lives, Soap Opera, Spoiler, Television 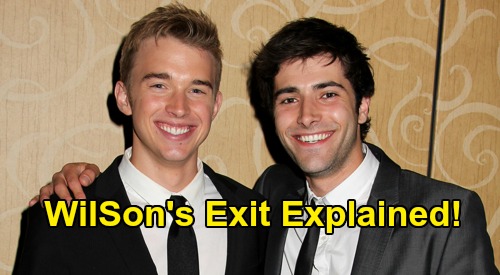 Days of Our Lives (DOOL) spoilers tease that Will Horton (Chandler Massey) and Sonny Kiriakis (Freddie Smith) will soon be wrapping up their storylines. As you might have heard, both Chandler Massey and Freddie Smith have been let go from the show, which means that the popular “WilSon” paring will soon be off our screens for the foreseeable future.

Of course, given DOOL’s advanced taping schedule, the characters won’t actually exit on-screen until the fall of 2020, so that still gives WilSon fans a few more months to enjoy their pairing, which is the good news for the time being.

Both Chandler Massey and Freddie Smith have posted on social media about their firings and have been open with fans about the announcement. Chandler posted on Twitter: “Wish it weren’t coming to an end, but I will be forever grateful to everyone who went on this journey with us.”

And Freddie said: “I will miss Salem so much!! Thank you all for the incredible love and support throughout the years. I really feel we told a love story that will live on forever.”

Freddie later commented on Instagram on his last day of filming at DOOL. He said: “About to film my last scenes at Days in a bit. It still doesn’t feel real. Going to miss everyone so much.” Well, it seems that fans are going to miss Freddie and Chandler as well.

In fact, loads of fans have been weighing in since the big announcement, with a considerable amount of outrage and sadness over the decision. One commented: “Absolutely the wrong decision to let you guys go. You’re both amazing and #WilSon is the best thing about #days. I’m so sorry and sad about this.”

And another said: “Dammit! I can’t believe this! Will miss #Wilson.” Finally, someone commented: “What????!!!! Are you freakin kidding me!!!! This is ridiculous. You both will be missed. I hope you guys come back.” Some fans have even started petitions to bring WilSon back, so the upset is serious, and there are those working very hard to bring the pair back.

Of course, it’s always possible that WilSon will come back at some point down the road, which is something that would make a lot of fans happy. But we have to wonder why TPTB decided to let this popular coupling go in the first place.

Often, these sorts of firings are due to budgetary or storyline reasons, meaning that the writers simply don’t have a new direction for the characters or that they want to focus on other characters down the line.

Still, that probably rings hollow for the WilSon fans out there. But perhaps Will and Sonny will get treated to a grand send-off. For example, they could leave Salem together happily reunited and with some new goals and dreams that end up taking them away from Salem. However they end up leaving, one thing’s for sure – they’ll be sorely missed!

Will you miss Will and Sonny once they’ve gone? Be sure to stay tuned to Days of Our Lives and don’t forget to check back with CDL for the latest DOOL spoilers, news, and updates.