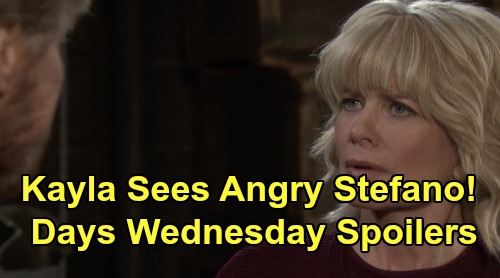 These two have been through a lot thanks to Princess Gina Von Amberg aka Hope Brady (Kristian Alfonso), but now’s their chance to settle down and get in the mood for love.

DOOL viewers can expect some sweet scenes between Marlena and John, so “Jarlena” fans are in for a treat. They should enjoy dialing down the drama for a change!

Meanwhile, Hattie Adams (Deidre Hall) will bond with Roman Brady (Josh Taylor). They’ll share a nice little moment of their own, so it’ll be interesting to see if this leads somewhere.

Hattie would definitely like to make Roman her man, but that’s a bit weird for him since she looks just like Marlena. There’s also Hattie’s offbeat personality to consider. Not everyone’s cut out for a relationship with Hattie!

However, they’re both single, so you never know when Cupid’s arrow might strike. Even a stronger friendship would be appreciated.

Other Days of Our Lives spoilers say Rafe Hernandez (Galen Gering) and Justin Kiriakis (Wally Kurth) will team up. They’ll be on the hunt for Kayla Brady (Mary Beth Evans), who recently went missing.

Rafe will also give Justin updates on the search for Stefano DiMera aka Steve Johnson (Stephen Nichols), so it shouldn’t take them long to realize he’s keeping Kayla somewhere.

Days spoilers say Justin and Rafe may run into some snags on their search, but they’ll keep at it. Kayla’s clearly in danger as long as she’s in Stefano’s grasp. Of course, Kayla doesn’t know she’s with Stefano, but that’s about to change. After Kayla pushes one too many buttons, “Steve” will finally reveal his true identity.

Days of Our Lives spoilers say “Steve” will admit he’s Stefano DiMera, so Kayla will obviously be skeptical about that. She’ll think that’s crazy talk, but “Steve” will explain the story of his transplanted “essence” and remove his eye patch.

By the end of this conversation, Kayla will indeed buy that Stefano has taken over Steve’s mind and body. When she tries to make a break for it, Stefano will stop Kayla in her tracks.

Days of Our Lives spoilers say Stefano will restrain Kayla and prepare for a trade next week. He’ll hope to use his hostage as leverage to get his hands on Marlena, so the action’s about to rev up! As other Days spoilers, news and updates roll in, be sure to stop by CDL for all the latest DOOL info.