Days of Our Lives Spoilers: Hattie and Roman Share A Sweet Moment – New DOOL Couple In The Works? 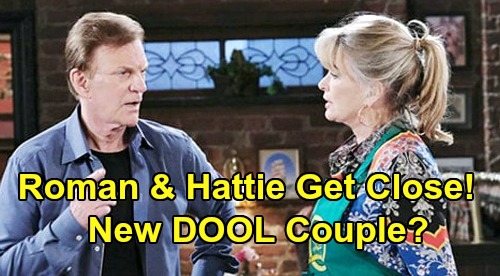 Stevano was under the impression that he was holding Marlena Evans (Deidre Hall) hostage in the secret lair, but when he confessed who he really was to her, he quickly realized that “Marlena” was Hattie.

In fact, Hattie totally gave herself away when she stated aloud that she couldn’t go through with kissing Stefano when she has such strong feelings for Roman Brady (Josh Taylor).

Of course, Hattie has had a big crush on Roman for a while now, and Roman’s had to seriously fight off her advances on numerous occasions, past and present.

Well, it seems that Hattie will manage to get out of her terrifying situation with Stevano unscathed. We’ll see how that all comes about, but Days of Our Lives spoilers indicate that she’ll be ok and will soon be out of Stevano’s clutches.

Actually, Stevano will probably drop Hattie like a hot potato now that he knows that she’s not actually his Queen of the Night.

Interestingly, Days of Our Lives spoilers indicate that Hattie might soon have a good turn of luck, and let’s face it, she deserves it! Sure, she’s done some questionable and illegal things in the past that have caused quite a bit of trouble, but deep down she seems to have a good heart and she deserves a break.

DOOL spoilers say that Roman and Hattie will share a sweet moment, and it looks like it will coincide with Valentine’s Day in Salem.

While Marlena and John Black (Drake Hogestyn) are having a nice Valentine’s Day reunion after their ordeal with Princess Gina Von Amberg aka Hope Brady (Kristian Alfonso), it seems that Roman may find himself softening toward Hattie. Perhaps they’ll have a little Valentine’s Day celebration of their own.

And that leads us to wonder whether Roman would ever fall for Hattie. It’s kind of a long shot, but stranger things have certainly happened on DOOL. Roman needs a good romance, and so does Hattie. Perhaps the two will even share a kiss on Valentine’s Day!

Do you look forward to seeing Roman and Hattie’s special moment? Stay tuned to DOOL and don’t forget to check CDL often for the latest Days of Our Lives spoilers, updates, and news.