BY hellodrdavis on December 13, 2019 | Comments: one comment
Related : Days of Our Lives, Soap Opera, Spoiler, Television 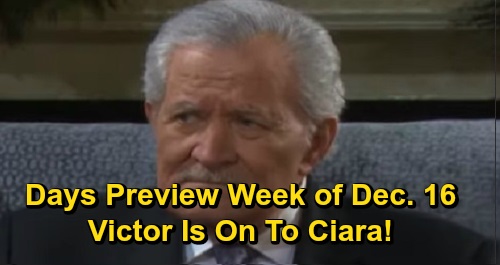 Days of Our Lives (DOOL) spoilers tease that viewers are in for a big week involving some big lies. The new DOOL promo for the week of December 16th is all about “reading between the lies,” and addresses some fibs made by three characters involved in three of the big storylines at the forefront on DOOL. There’s a lot to reveal, so let’s get right into it!

First off, Kayla Brady (Mary Beth Evans) is shown enjoying a meal with her new beau Justin Kiriakis (Wally Kurth) at the Brady pub. She tells Justin, “I’m over him, truly,” clearly referring to Steve Johnson (Stephen Nichols). Kayla and Justin have a good relationship and have been open and honest about their feelings for their previous spouses, and Kayla probably finds it fairly easy to proclaim that she’s over Steve, given the way that she and Steve ended their marriage.

Of course, DOOL viewers know that the marriage ended because Steve’s body was taken against his will and used as the host for Stefano DiMera’s (Joesph Mascolo) memories and personality. Now, Stefano is walking around in Steve’s body, and that almost certainly means that Steve didn’t want a divorce and was somehow held against his will.

Of course, when Kayla finds this out, she’s going to freak out and her stance on being “over” Steve may completely change. As it turns out, she may see Steve (or, more accurately, Steve’s body) sooner rather than later, as the DOOL promo shows Steve out in public outside of the Brady pub as Kayla and Justin are dining inside.

Next, the promo addresses another lie – this one perpetrated by Kristen DiMera (Stacy Haiduk). Kristen is heard in the promo insisting to Gabi DiMera (Camila Banus) by phone that she and Lani Price (Sal Stowers) aren’t friends. DOOL spoilers indicate that Gabi will receive a surprise phone call from Kristen, who will have an ulterior motive for calling.

As DOOL viewers know, Lani and Kristen are indeed close, and they’re even shown in the promo getting massages together and looking like besties. And we know that Kristen was absolutely appalled when she found out how Gabi had blackmailed Lani into dumping Eli Grant (Lamon Archey) at the altar.

It looks like Kristen and Lani will have a plan to get Gabi back for all the pain she’s caused, and it could involve Kristen pretending to befriend Gabi. We’ll see if Gabi falls for it, but she probably won’t be able to avoid Kristen since she’s a DiMera. Perhaps Kristen will try to get close to Gabi to get her to admit what she did to Lani.

Finally, the promo addresses a big con currently being run by Ciara Brady (Victoria Konefal). As DOOL viewers know, Ciara has gone to great lengths to get her grandfather Victor Kiriakis (John Aniston) to believe that she’s over and done with Ben Weston (Robert Scott Wilson). Of course, she’s totally still with Ben, but she wants Victor to believe that she’s not, so that she can get closer to him and hopefully expose his plot to frame Ben.

It seems that Victor and Xander Kiriakis (Paul Telfer) may have framed Ben by killing his sister Jordan Ridgeway (Chrishell Stause) before the time jump…or at least that’s what Ciara believes. She wants both Victor and Xander to let their guards down so she can find evidence clearing Ben of the murder. But she may have some difficulty with that, as it seems that Victor will soon be onto her.

The DOOL promo shows Ciara telling Victor that there’s no way that she will ever be with Ben again, but Victor dryly says, “Well, then how do you explain all those visits to the prison lately?” Perhaps Ciara will cover and say that she was visiting Will Horton (Chandler Massey), or she might just be out of luck as Victor’s got her number.