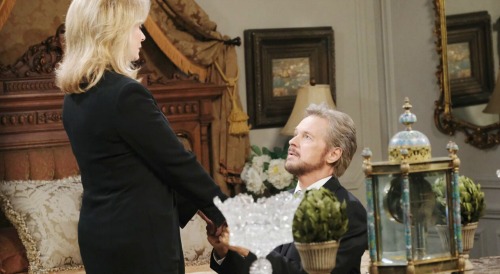 Days of Our Lives (DOOL) spoilers tease that Marlena Evans (Deidre Hall) will continue to struggle with her feelings. Thanks to Dr. Wilhelm Rolf’s (William Utay) procedure, Marlena is now a slightly more submissive version of herself. Stefano DiMera aka Steve Johnson (Stephen Nichols) is doing his best to shape Marlena’s view of him and mold her into the perfect wife he wants.

Of course, if Marlena’s going to be Stefano’s wife, then a marriage proposal is in order. Stefano likes to do things in grand fashion, so that’s exactly what he’ll do during the week of March 23-27.

Days spoilers say Stefano will recreate a place of historical significance to both Marlena and DOOL viewers. With a little help, Stefano will construct a replica of Maison Blanche.

Maison Blanche was an old DiMera family house, which John Black (Drake Hogestyn) was held captive at in the ‘90s. This recreation will certainly please Stefano. As for Marlena…well, Stefano will tell her what to think about it! Marlena’s not very in control of her own thoughts at the moment, so Stefano will just gush about how wonderful it is and hope he can convince her.

Days of Our Lives spoilers say Stefano will get settled in with Marlena before he makes a bold move. Marlena will be taken aback when Stefano drops to one knee and asks her to become his wife.

This is obviously quite sudden, which Marlena will point out. Even though Marlena’s not exactly herself right now, she’ll also know that she’s still married to John.

An irritated Stefano will shut down all that talk about John and insist this wedding’s going to be great. Stefano will push Marlena to trust him, so she won’t know any better.

Nevertheless, Marlena will feel John’s pull during all this madness. Days spoilers say Marlena will fight to break free from this mind control – and she could have a chance since she was only given minor modifications.

Stefano will plan to hold the nuptials at recreated Maison Blanche, but Marlena’s resistance will present a problem. The same goes for Tony DiMera (Thaao Penghlis), who actually has a conscience and just won’t think any of this is right.

Naturally, John will serve as the biggest threat to Stefano’s wedded bliss! John will lead a team rescue effort with Brady Black (Eric Martsolf) and Hope Brady (Kristian Alfonso), so they’re sure to bring this ceremony to a screeching halt.