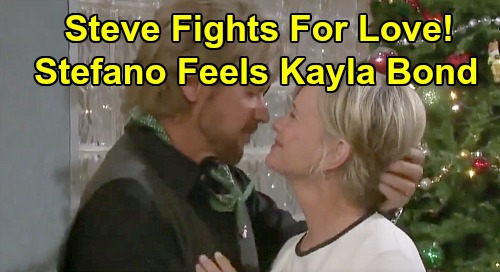 Days of Our Lives (DOOL) spoilers tease that Stefano DiMera aka Steve Johnson (Stephen Nichols) will feel a strange pull to Kayla Brady (Mary Beth Evans). It’ll obviously be one he didn’t expect and hasn’t felt up to now. Ever since his return to Salem, Stefano has been all about his “Queen of the Night,” Marlena Evans (Deidre Hall). He’s convinced that he can have a future with the woman he wants, but what if the man at his core wants someone else?

That’s certainly the situation we’re dealing with here. Steve loves Kayla with all his heart and would be devastated to know how hurt she’s feeling. They’re soul mates, and that’s a tough bond to break. Even implanted memories may be no match for true love!

Days of Our Lives spoilers say Stefano will have a visceral reaction when he first locks eyes with Kayla. It won’t exactly be one of love yet, but something will definitely hit Stefano hard. He’ll be taken aback by the fact that he’s drawn to Kayla in that moment, but he’ll shake it off and focus on Marlena.

Of course, it’s significant that Stefano’s going to feel this way – even just for a moment. It shows that the real Steve is still in there somewhere, and he could fight back to Kayla. Days spoilers say Stefano will reveal himself as “Steve” during the week of December 30-January 3. It looks like “Steve” will make himself known at the big New Year’s Eve gathering, but Kayla will definitely demand a private conversation later.

Days of Our Lives spoilers say Kayla will naturally get emotional as she confronts “Steve.” She’ll lash out over the pain “Steve” caused and how he signed the divorce papers like they were nothing. It’ll bring another chance for the real Steve to push through. DOOL fans will likely see Stefano have another visceral reaction to Kayla, but it’ll be a while before the truth comes out.

Nevertheless, it’d be nice for Steve to fight his way back to Kayla down the road. Maybe Steve could come through just enough to get a clue to Kayla – something she could latch onto! If Kayla starts to suspect there’s more to “Steve” than meets the eye, it could be the key to cracking this case.

Days spoilers say there’s some hot drama coming up on the NBC soap. We’ll give you updates as other news emerges. Stay tuned to DOOL and don’t forget to check CDL often for the latest Days of Our Lives spoilers, updates and news.