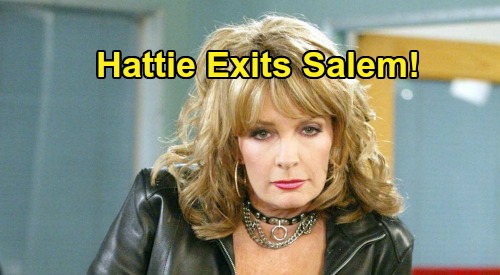 Days of Our Lives (DOOL) spoilers tease that viewers will have to say goodbye to a fan favorite soon. Many DOOL watchers love Deidre Hall as Hattie Adams, but her stint in Salem is almost over. We’ve got the scoop on what to expect as Hattie wraps up her time on Days.

Hattie’s always held out hope that maybe Roman Brady (Josh Taylor) would love her back, but she hasn’t had any luck so far. Since Roman gave Hattie a little kiss on the cheek not too long ago, Hattie got the wrong idea about what it meant. As Hattie mentioned, it wasn’t the first time that’d happened.

Roman should’ve known better than to give Hattie another peck and remind her of what could be, but what’s done is done – and now Hattie’s stuck pining. Although Roman hasn’t shown any true romantic interest in Hattie, she can’t help but think there’s something more than friendship between them.

Days of Our Lives spoilers say Hattie will call Roman out on that and push him to reveal his true feelings. Hattie will think they should really put their hearts out there and let this go somewhere. Unfortunately, Hattie’s the one who’s going somewhere instead!

When Roman’s adamant about just being pals, Hattie will determine that she should leave town and seek a fresh start. It’d be too tough for Hattie to keep hanging around Roman when she’s got such strong feelings for him. Hattie needs to move on – and it’ll be easier to do that if she puts some physical distance between them.

Days of Our Lives spoilers say Hattie will make her exit on Thursday, March 26. Of course, that means Deidre Hall will conclude her time playing this dual role. Hall will remain on Days as Marlena Evans, but DOOL viewers will have to bid Hattie farewell.

Hattie is a barrel of laughs on any given day, so most of us will hate to see her go. On the bright side, Hattie will likely return once a Marlena lookalike is needed again. If Marlena ever needs a doppelganger to fill in for her, her loved ones know exactly who to call.

For now, Hattie will depart Days of Our Lives and head off on her next adventure. As other news comes in, we’ll pass along other DOOL updates. Have you enjoyed Deidre Hall’s stint as Hattie Adams? CDL’s your hotspot for fantastic Days of Our Lives spoilers, updates and news.